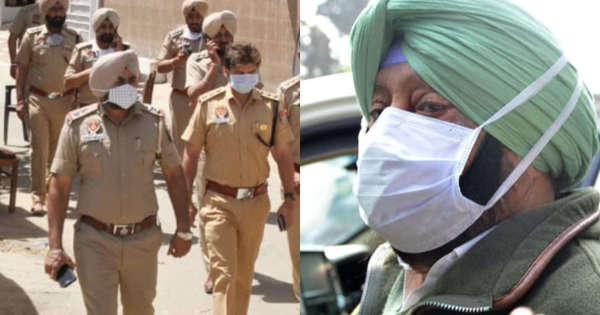 As the Punjab Police department geared up for the next stage of its mega recruitment drive, Chief Minister Captain Amarinder Singh on Saturday directed the DGP to intensify the crackdown on leakage of exam papers, cheating, copying, etc., after six persons were reportedly arrested for their suspected involvement in cheating during the Written Test held for Sub-Inspectors on August 22.
The directives come ahead of the commencement of written exams for Head Constables (Investigation cadre), to be conducted from September 12 to 19 for 75,544 applicants who have applied for 787 vacancies, followed by exams for Constables (District & Armed cadres), slated for September 25-26, with a whopping 4,70,775 candidates have applied for filling up 4,358 vacancies. Following this, in a first-of-its-kind move by any state police in the country, another recruitment drive will take place in October for appointing 2600 uniformed specialists in the Punjab Police Department.
The Chief Minister asked DGP Dinkar Gupta to further intensify the security measures at the examination centers in view of reported attempts by recruitment fraudsters and scamsters to sabotage and subvert the examination process.

Also Read: Pending cases will be resolved soon: Minorities' panel chief
Jammers and other electronic gadgets were being installed in all examination centers to prevent internet or Bluetooth connectivity, said Dinkar Gupta, in the wake of the arrest of six persons by Khanna Police in connection with cheating through Bluetooth connectivity during the Written Test for Sub-Inspectors held in Chandigarh and various districts of Punjab from August 17 to 24, 2021. More arrests are likely in the case, he said, adding that any person, whether a candidate of tout or a professional scamster, found involved in any examination related malpractices will be immediately booked and arrested.
Warning candidates appearing for the next rounds of the Punjab Police recruitment exams to beware of touts, fraudsters and scamsters trying to lure, trick and cheat gullible individuals, the DGP made it clear that any promises of jobs through unfair means/incentives were totally false. Any information about such offers/promises can be made on DIAL 181 Helpline, which is a 24x7 Punjab Police Helpline, he added
Giving details of the arrests made Khanna Police in FIR no.170 registered under sections 420,467,468,471, 120- B IPC 66,66C IT Act on 23.8.2021 at PS City-II, Khanna, the DGP identified them as Ankit & Vikas r/o Khanouri (Sangrur), Ranbir Singh of district Hissar, Amit r/o Sonipat, Rajinder Singh r/o Hissar and a Sub-Inspector aspirant, Navjot Kaur r/o Jind. Navjot, arrested from her village in Jind (Haryana) this morning on the disclosures of Vikas Singh, r/o Khanouri, Sangrur, had admitted that Vikas Singh met her and her father in Sector-19, Chandigarh on 21st August 2021, and handed over a micro-earphone and an electronic Bluetooth device for the purpose of communicating correct answers during her examination said, Gupta.

Also Read: Gangster Gaurav Patial ‘Lucky’ involved in Youth Akali Dal leader Vicky Middukhera murder case
Gurpreet Kaur Deo, Chairperson of the Central Recruitment Board for Constables,  said that strict protocols have been laid down for securing the areas outside the Test Centres as well as within the venues, and multiple rounds of physical frisking will be carried out, apart from the use of various types of electronic & digital gadgets, etc.
The Punjab Police mega recruitment drive is being conducted through 6 Recruitment Boards, each constituted under an ADGP rank officer.
So far, the written test for the posts of Sub-Inspectors (District, Armed, Intelligence & Investigation cadres) and Constables of the Intelligence and Investigation cadre had been conducted successfully, while the Written Tests for Head Constables of Investigation Cadre would begin from tomorrow and will conclude on 19th September 2021. Among the 1,10,524 candidates who had applied for the 560 Sub-Inspector vacancies, around 7,589 candidates were graduates in Information Technology, Computer Science, Software engineering, etc. and 1,714 candidates were post-graduates. 80,826 male candidates and 29,698 female candidates had applied for the recruitment to these posts.
The application forms for Constables (Intelligence & Investigation cadres) went Live from 26 July-28 August 2021. A total of 53,632 candidates applied for the written test that was held from 7-10 September 2021 for filling up 1,156 vacancies. Among these, 42,276 candidates are male while 11,356 candidates are female. Further, around 5,055 candidates are graduates in Information Technology, Computer Science, Software engineering, etc. and 1,853 candidates are post-graduates.