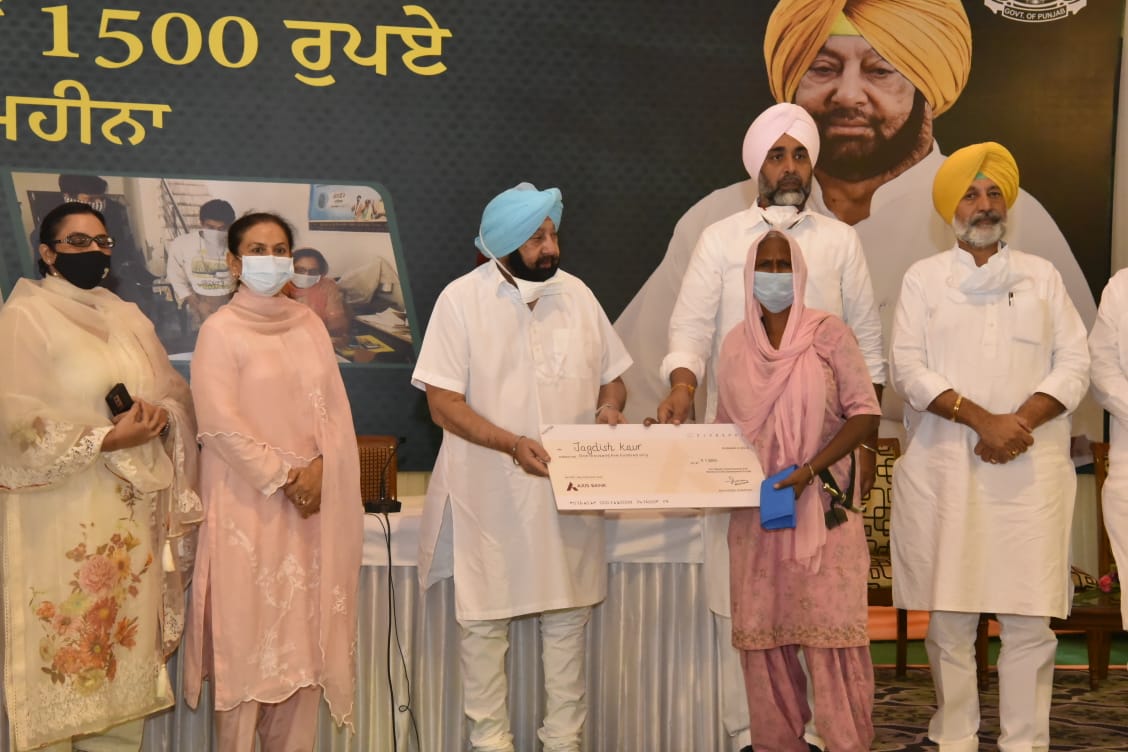 Fulfilling a major poll promise, the Punjab Chief Minister Captain Amarinder Singh on Tuesday launched the enhanced Social Security pension of Rs. 1500 per month, a threefold increase from Rs. 500 earlier given by the SAD-BJP alliance government.

Addressing the people on the occasion, the Chief Minister said that Sardar Beant Singh laid down his life for peace, which ultimately led to a congenial atmosphere to ensure economic development in the state.

The Chief Minister further said that out of 547 poll promises made in the manifesto, 422 have already been fully implemented, 52 partially while 59 are yet to be implemented. “Thus, we have fulfilled 90 percent of the implementable promises which is the highest ever in any State after Chandra Babu Naidu’s government in Andhra Pradesh”, said Captain Amarinder Singh adding 14 promises are difficult to fulfill as these are related to VAT which has been replaced by the GST regime.

Elaborating on the other welfare measures undertaken by his Government in line with the several promises made with the people, Captain Amarinder Singh said that the amount under shagun scheme (Aashirwad) has already been enhanced to Rs. 51,000. Likewise, relief worth Rs. 4700 crore has been disbursed to small and marginal farmers under ‘Kisaani Karza Raahat’ besides Rs. 520 crore as debt relief to farm labourers and landless farmers. As promised, the state government has already given Smartphones to the students of Class XII, said Captain Amarinder Singh.

The Chief Minister further said that his government had already revived the SC scholarship to enable the poor and needy students to pursue higher learning. Similarly, loans upto Rs. 50,000 of SC/BC Corporation have also been waived towards debt relief for disadvantages sections of the society. Towards empowerment of women, the state government has already ensured 50% reservation for them in Panchayats/Urban Local Bodies besides 33 percent reservation in jobs along with free bus travel facility.

As many as 17 lakh jobs have been facilitated as part of ‘Ghar Ghar Naukri’ initiative apart from free medical insurance to 38 lakh persons. Likewise, Punjab secured the top position in the country in School Education as a result of concerted efforts to ensure robust school education infrastructure for imparting quality education, the impact of which is clearly visible from the trend as more and more students are now keen to take admissions in government schools instead of private ones.

Reiterating his government’s firm commitment to fulfill all the promises made to the people, the Chief Minister said that every single grain from the mandis has been lifted by honouring the promise ‘Dana Dana Chakkange’ besides making all out efforts to protect the precious natural resource of water in the right earnest.

On the occasion, the Chief Minister disbursed cheques of enhanced pension to 10 old age, widow, destitute and handicapped beneficiaries to mark the symbolic launch of the scheme across the state. Meanwhile, three beneficiaries namely Paramjit Kaur an elderly lady from Jalandhar, Mamta Rani a widow from Patiala and Inderjit Singh a differently abled person from Gurdaspur expressed gratitude to the Chief Minister for doubling the monthly pension from Rs.750 to Rs.1500.

Notably, people from across the state virtually joined today’s event at nearly 4000 different locations while several Ministers, MLAs and other people’s representatives participated at 400 functions organized in different parts of the state for disbursal of cheques of enhanced social security pension.

Speaking on the occasion, Social Security, Women and Child Development Minister Aruna Chaudhary lauded the Chief Minister to double the social security pension from Rs.750 to Rs.1500 per month from July 1, 2021 to 27 lakh old age, widow, destitute and handicapped beneficiaries. With the enhanced pension, the annual budget for disbursal of these security pensions has gone up to Rs.4800 crore.

She also mentioned that the Congress government has hiked this pension four times during its tenure of 15 year rule since 1992 including thrice during Captain Amarinder Singh’s nine year term as Chief Minister whereas the SAD-BJP regime increased the pension merely once during its 15 years of regime, said Aruna Chaudhary.