Punjab Cm To Sukhbir: Talks Won’t Absolve You Of Your Responsibility, You’re The Root Cause Of The Farm Laws Problem

Asks ‘Why Did You Not Talk To Them Before Thrusting The Anti-Farmer Ordinances In Collusion With Bjp?’ 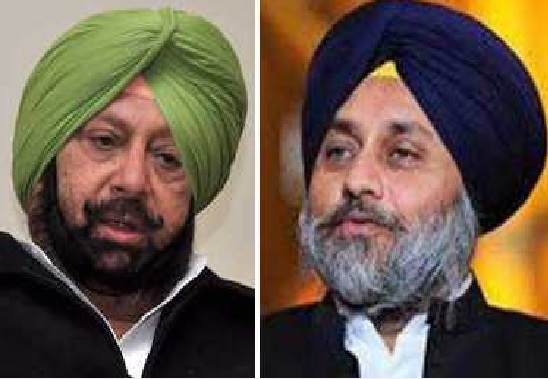 Chandigarh, September 4: Ridiculing the Akali decision to set up a panel to hold talks with the state’s angry farmers, Punjab Chief Minister Captain Amarinder Singh on Saturday said no overtures could absolve the Badals of their responsibility in thrusting the draconian and undemocratic Farm Laws on the farming community.

Considering that the Badals themselves were at the root of the problem, and the co-conspirators of the Centre’s anti-farmer agenda, the Akalis neither deserve nor can expect any understanding or forgiveness from the farmers, said the Chief Minister.

The Akalis’ apathy towards the farmers was evident from the fact that even now, instead of understanding and relating with the pain of the farmers, Sukhbir was refusing to simply recognise the protestors as farmers and was insulting them by alleging that they owed allegiance to other political parties, including the Congress, said Captain Amarinder.

“If you (Sukhbir) cannot even recognise a farmer when you see one how can you ever hope to gain their trust and confidence,” asked the Chief Minister, adding that only a true son of Punjab’s soil can empathise with its people and their pain.

Captain Amarinder termed Sukhbir Badal’s announcement of suspension of the Shiromani Akali Dal’s election outreach programme and formation of the panel to engage with the farmers as a desperate measure to woo Punjab’s voters ahead of the 2022 Assembly polls. “But the farmers, and the people of Punjab are not fools, and your attempts to befool them with lies will backfire on you,” he warned the SAD president. He added that the state had completely and unequivocally rejected the Akalis, who had first looted them for 10 years in coalition with the Bharatiya Janata Party (BJP) and then cruelly worked hand in glove with them to impose the Farm Laws on the farmers.

The Chief Minister pointed out that SAD was an integral part of the ruling NDA at the Centre all through the Farm Laws legislation process, with Harsimrat Badal a member of the Union Cabinet which approved the Ordinance that spelt the death knell for the farmers. Their dramatic split from the NDA subsequently was nothing but an attempt at eyewash, he said, adding that the SAD and BJP were clearly still working in collusion against the interests of Punjab.

All that the Badals are interested in is getting back into the saddle by hook or by crook, said Captain Amarinder, adding that having failed in getting restoring the faith of the farmers with their crocodile tears, the Akalis were now pretending to engage with them. “Why did they not talk to the farmers before allowing their partners in the NDA to bring in the black laws?”, he asked, pointing out that even after the Ordinances were introduced, the Badals had refused adamantly to pay heed to the farmers’ concerns and had, instead, vigorously defended the laws for several months.

Terming Sukhbir’s statement on ‘removing all misunderstandings’ by talking to farmer organisations’ as ludicrous, the Chief Minister said that there were no misunderstandings among the farmers about SAD’s role in the entire Farm Laws affair, which was a clear and brazen conspiracy on the part of the BJP to appease their capitalist crony friends at the cost of the farming community.