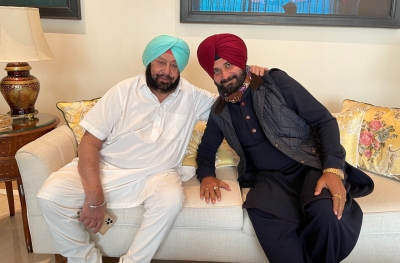 Why meeting between Congress working President Sonia Gandhi and Navjot Sidhu remains inconclusive even after Sidhu was summoned to Delhi by Sonia for a meeting over the crisis in the Punjab Congress? Sources claimed that before the proposed meetings between Sonia and Sidhu, on Friday morning, Captain Amarinder Singh had sent his OSD Narinder Bhambri to Sonia Gandhi with a ‘sealed letter’ which reportedly has change the course of Sonia-Sidhu meeting.

Sources claimed that the letter was reportedly written with a strong message appealing the Working President not to impose Sidhu against the wishes of the majority of party legislatures.

Sources further claimed that Captain Amarinder Singh has cautioned the Party High Command not to take any decision to please one person at the cost of revolt within the party. The letter also suggests Sikh-Hindu formula for social interest in the state.

However, sources also claimed that there are high chances that Sidhu will take over as Punjab Congress president with two working presidents, “one from the Dalit community and the other a Hindu face”, as this formula suits all and could end the prevailing crisis.

Moreover, tensions seem to have escalated in Punjab Congress as both Amarinder Singh and Sidhu had rounded up MLAs and ministers on their side and gone into separate meetings.

Navjot Sidhu on Thursday held a meeting with six MLAs, including three cabinet ministers - Sukhjinder Singh Randhawa, Charanjit Singh Channi and Tript Rajinder Bajwa, while the Chief Minister went into a huddle with party MLAs and MPs supporting him at his private farmhouse in Mohali.