Punjab Elections 2022: Instead of forcing a CM, AAP decides to ask the public via a phone number

The number will remain open till 5 pm on January 17. After that the data will be collected and the CM face will be announced. 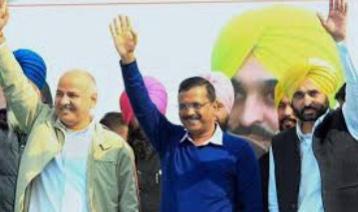 After the guarantee guard, now through the CM face in Punjab, the Aam Aadmi Party has found a new fund of public connect. In Mohali on Thursday, Arvind Kejriwal released the number 70748-70748. He said that for the first time in the history of India, we are asking the people who should be their Chief Minister.
Feedback can be given through WhatsApp, SMS or call on this number. This number will remain open till 5 pm on January 17. After that the data will be collected and the CM face will be announced
Talking to the reporters he said—" “If AAP forms the government, we will ensure that we provide necessary security to the Prime Minister and the common people.”
Apart from this, Kejriwal also targeted the Charanjit Singh Channi-led Congress government over law and order in the state.
Arvind Kejriwal said that he had agreed to declare Bhagwant Mann as the CM face. Bhagwant Mann is my younger brother and the most prominent leader of the party in Punjab. However, Bhagwant Mann said about this that we should ask the public. We should not decide the face of the CM in a closed room. Bhagwant Mann also said that CM is imposed on people, but this time it will not happen.
Also Read: Punjab Elections 2022: Internal quarrels increase as Channi and Sidhu demand the announcement of CM face
Arvind Kejriwal said that he is not involved in the race for CM face in Punjab. This time, not 60, but more than 80 seats should be given in the elections. We have left everything to the people. Whatever the public will say, we will make them the CM face of the party in Punjab.
It is likely that the party may declare its state unit president and Sangrur MP Bhagwant MP as the chief ministerial candidate for the polls.