A day after advocating for a 24-hour supply with no power cuts and free power up to 300 units, Congress leader and former state minister Navjot Sidhu has asked the Captain Amarinder-led-Punjab Government to bring ‘White-Paper’ on Badal signed PPAs.

In a series of tweet, Navjot Sidhu said, “Badal-signed PPAs are looting Punjab & legal options against them are limited due to their protection from Hon’ble Courts. Only way forward is “New Legislation in Punjab Vidhan Sabha” with retro-effect capping power purchase prices to make the anti-people agreements redundant”.

He has earlier said that Punjab already provides Rs 9,000 crore subsidy but the govt must do more for domestic and industrial consumer giving power at Rs 3-5 per unit instead of surcharge inflated Rs 10-12 per unit, along 24-hour supply with no power cuts and free power up to 300 units.

He also tweeted that a White-Paper on PPAs must be brought in Punjab Vidhan Sabha to make Badals & other authors of these corrupt agreements accountable to People. “I have been demanding this since 2017, But bureaucratic control of department corners People-elected Ministers to mere showpieces”, he added. 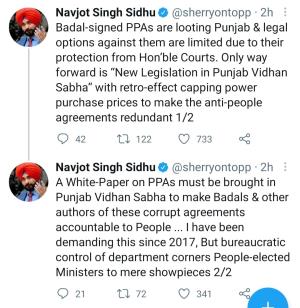 Meanwhile, the tussle in the Punjab Congress is far from over with Chief Minister Amarinder Singh and Navjot Singh Sidhu still at loggerheads and the latter is not leaving any stone unturned to target the Chief Minister, though interventions from the Gandhis have been futile and both sides are flexing their muscles.

Since the past many days Sidhu has been targeting his own government over power outages and asked the government to follow the AAP's Delhi model of extending subsidies to generation companies.

Besides, the formula suggested by Priyanka Gandhi to position Sidhu at the helm in the organisation has not been endorsed by Rahul Gandhi and the former Congress chief is upset with Sidhu for targeting the Chief Minister publicly.