Opposing parties were seen in full action with the involvement of senior leaders against the ruling AAP and launched attack against CM Bhagwant Mann on a wide range of matters Author : Tushar Singh 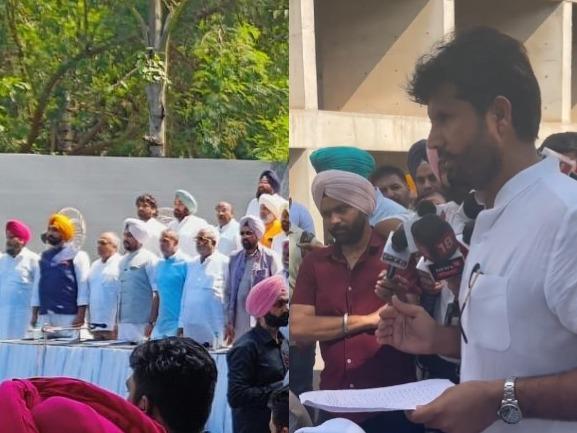 The opposition parties, Congress and BJP are running a separate session outside the Punjab Vidhan Sabha on the first day of the special Vidhan Sabha session convened by the ruling Aam Aadmi Party through the governor’s request today.

BJP, which was at the loggerheads over the special assembly session against the ruling AAP is now running a parallel session outside Punjab Assembly and has named it ‘Janata Vidhan Sabha.’

The proceeding of a special gathering began with the national anthem with members poised to oppose the Bhagwant Mann-led government’s proceedings inside the assembly hall.

BJP imposed a wide range of allegations against the ruling AAP in the parallel assembly session including corruption, and a motion condemning Chief Minister Bhagwant Mann.

Whereas, the Congress was also seen in full action outside the Assembly holding a parallel session condemning the move of the CM and speaker for suspending elected Congress’ MLAs.

Congress leader Sukhpal Singh Khaira took a jibe at the ruling AAP by tweeting the video of the proceeding of Congress’ assembly session showing state Congress president Raja Warring addressing the leaders at the session.

Opposite the Congress, the BJP which has just 2 MLAs in the Punjab assembly is running their ‘Janata Vidhan Sabha’ in Sector 37 of Chandigarh in the open space, seeing the involvement of BJP’s top leaders including veteran Sunil Kumar Jakhar

Ajaib Singh Bhatti who served as deputy speaker during the Congress regime was unanimously declared the speaker of the Janata Vidhan Sabha, whereas Jeevan Gupta was deployed with the responsibility of Protem Speaker.

The decision to preside with a Janata Vidhan Sabha was taken at a special meet that saw the involvement of former Congress CM Captain Amarinder Singh but wasn’t present at the session this morning.

Punjab Assembly session has kept the politics in the state on the boil. It was supposed to be convened on September 22nd but was later denied by Governor Banwarilal Purohit after granting permission.