B Praak was named Best Playback Singer Male in 67th National Film Awards for his song "Teri Mitti" from the film Kesari.

The 67th National Film Awards were announced in March 2021 to celebrate the cinematic performances of 2019 and the awards were presented to the winners today. Punjabi singer B Praak is among the award winners.

The singer has not only made a name for himself in the Punjabi industry but has also proven his worth in Hindi cinema.

B Praak was named Best Playback Singer Male for his song "Teri Mitti" from the film "Kesari" and was awarded the Rajat Kamal.

'Teri Mitti' is a patriotic song from the action-war drama film 'Kesari,' starring Akshay Kumar. The song was an instant hit when it was released since the vibe of the song touched the audience.

Receiving such an award, according to B Praak, is a true blessing.

The Punjabi star announced his achievement by posting a story on Instagram. He shared a picture of the invite he received from the Ministry of Information and Broadcasting, captioning it “blessings”. 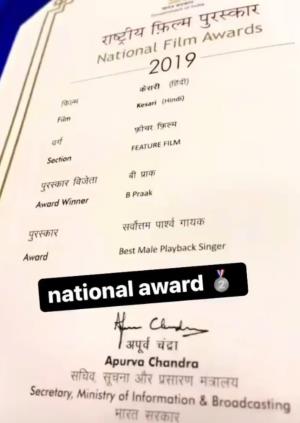 B Praak’s voice and music connect with people making their hearts feel the lyrics and music. The singer has produced a number of musical hits in Punjabi and Hindi as well.

Baarish ki jaye, filhal, mann bharryaa, masstaani are among B Praak’s hit songs. His songs Mann Bharryaa 2.0 and Ranjha from Sidharth Malhotra starrer Shershaah were praised by audiences across the country with people vibing to the tunes.