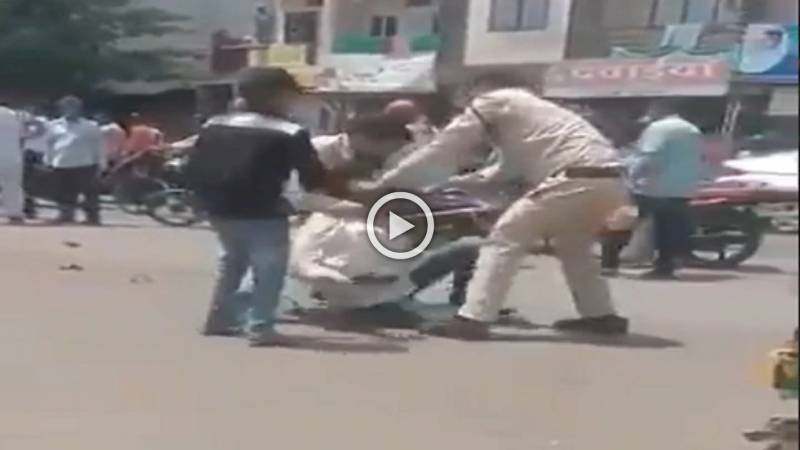 The nation is struggling to triumph over the Covid-19 pandemic by taking precautionary measures and the indigenous vaccine shots and the police authorities have been made responsible to enforce the norms strictly. However, in another move to make the public follow norms an inhumane video of Madhya Pradesh police beating an auto-driver for not wearing a face mask at a public place has come up. The video was shared by Congress leader Rahul Gandhi on his social media handles questioning the policemen's way of protecting the masses.

Presently, the video is doing rounds on the internet in which police constables can be spotted beating a 35-year-old man for flouting Covid-19 norms. The man has been identified as Krishankant Kunjir.  In the video, his wife and son can also be seen pleading to the officials to not beat him.

The incident took place in the Pradeshipura area of Indore, Madhya Pradesh after a verbal spat took place between the policemen and the victim for not wearing a face mask. Taking cognizance of the matter, Superintendent of Police (Eastern Region) Ashutosh Bagri said the two constables who appeared in the video have been suspended for improper treatment and the City Superintendent of Police (CSP) has been entrusted to investigate the case thoroughly.

Also Read: Viral video: Big officials, ministers and politicians are the real thieves, not the businessmen

Apart from this, Bagri has claimed that Kunjir was not wearing a mask and when the policemen on duty stopped him for interrogation, he grabbed the collar of one of the personnel and abused him, and tried to assault him.

He also alleged that the incident's video has been cropped to taint the image of the police. According to another police officer, Kunjir is a drug addict and numerous cases of extortion are lodged against him. Meanwhile, on social media, people are strongly denouncing the inhumane behavior of the police.