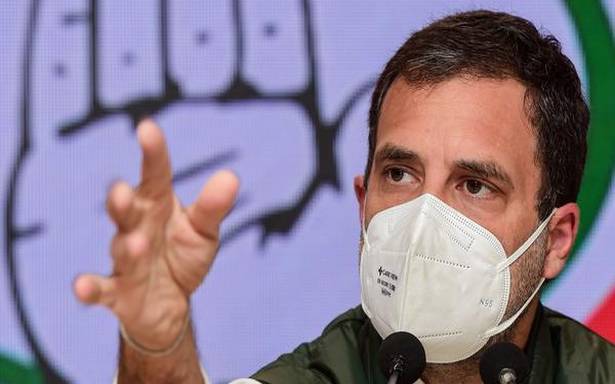 Former Congress President Rahul Gandhi on Tuesday with his Tweet once again attacked the Narendra Modi government for its inaction as "many innocent people" continued to lose the battle against Covid. He said the only way to stop the ever speeding coronavirus is an immediate complete lockdown with the protection of a minimum income guarantee scheme, NYAY for the vulnerable sections.

"Government of India doesn't get it. The only way to stop the spread of Corona now is a full lockdown - with the protection of NYAY for the vulnerable sections. Government of India's inaction is killing many innocent people," he tweeted.

Since the beginning of the pandemic, Congress has been asserting that the steps such as partial curfews, travel restrictions, closure and lockdowns taken by union and state governments will again be restricting economic activity that will impact heavily on the poor, therefore, it was important to provide monthly income support to people with lower income. Gandhi has been pushing for the implementation of the party’s recommended Nyuntam Aay Yojana (NYAY) providing a minimum income guarantee to vulnerable sections.

Congress and particularly, Rahul Gandhi, has been critical of the central government over the handling of the Covid-19 crisis in the country.

Crime has been committed against India.

While in another tweet today, Gandhi said the Modi government’s inaction has killed "many innocent people". India is losing the battle against Covid and a crime has been committed against India, Rahul added.

Sobbing at the government, Gandhi wrote, "I just want to make it clear that a lockdown is now the only option because of a complete lack of strategy by GOI. They allowed, rather, they actively helped the virus reach this stage where there's no other way to stop it. A crime has been committed against India."

On Tuesday, India recorded over 3.57 lakh fresh cases of Covid with 3,449 fatalities.