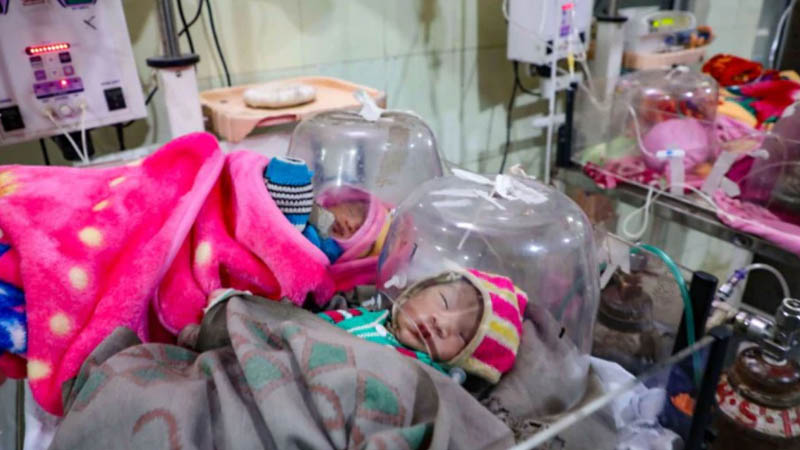 After being severely criticised for inaction after the death of over a hundred children at the JK Lon hospital in Rajasthan's Kota, the Ashok Gehlot-led Congress govt has gone into damage control mode.

Pilot, who also happens to be the Pradesh Congress Committee chief, came back to Rajasthan from Delhi after the interim Congress president Sonia Gandhi expressed her dismay over the deaths.

He was directed to visit Kota immediately and assess the situation there.

Meanwhile, Rajasthan Chief Minister Ashok Gehlot is scheduled to hold a press conference in Jodhpur at 4 pm. Not just in Kota but at least 10 infants have died in Rajasthan's Bundi in December. The number of infant deaths was revealed when the Additional District Collector (ADC) made a round of the hospital on Friday.

Back in Rajasthan's Kota, the situation continues to deteriorate even as many have appealed to the government to improve medical facilities.

Despite reports that medical staff at JK Lon hospital is "ill-equipped" to handle the situation, only a few two state ministers have visited the hospital.

Health minister Raghu Sharma and Transport minister Pratap Singh Khachariyawas went to Kota on Friday, several days after reports of deaths of children in Kota had begun pouring in.

Pratap Singh Khachariyawas,  mentioned that not even one person will be spared if any negligence is found.

"If the BJP could not do anything, then, it is our duty to perform well and I can give you assurance that there is no need to doubt our intention, (even if) life goes but we can say with guarantee that not even one person will be spared if someone is negligent," he added.

In December 2019, at least 100 children had died at the JK Lon hospital and the toll has now gone up by seven in the first four days of January 2020.

Despite the increasing death toll since last month, the state leadership including Chief Minister Ashok Gehlot and Health minister Raghu Sharma had been claiming that the state machinery was not at fault over the deaths of children in Kota.

The state government also claimed that in the period 2014 to 2019, the death toll in 2019 had been the lowest under the Gehlot government, which was formed in 2018.

The BJP, on the other hand, has demanded the resignation of Chief Minister Ashok Gehlot on moral grounds over the death of children in Kota.

On Tuesday, the BJP on the directions of its working president JP Nadda sent a three-member committee comprising MPs to Kota's JK Lon hospital and take stock of the situation there.

The BJP MPs lashed out at Rajasthan Government over the deaths of children at the Kota hospital and claimed there was "administrative laxity". They also urged the Gehlot government to take necessary measures to bring the situation under control.

Family members of infants said that there is a severe crunch of staff besides a shortage of medical equipment. They even said that doctors are not responding in a timely manner.

Manish, a father of an infant admitted to JK Lon hospital, said, "There are many problems. There is a lot of lack of hygiene over here. That is the reason behind infection."