Rajpura Incident: Denied time for a meeting, BJP leaders sat on a dharna outside CM residence

The rescued leaders claimed that the farmers chased, abused and heckled them. Also their vehicles were pelted with stones. 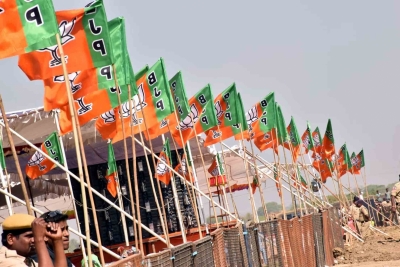 After being denied time for a meeting with the Chief Minister Captain Amrinder Singh, a delegation of BJP leaders, led by State President Ashwani Sharma sat on dharna outside CM residence.

The BJP delegation had gone to meet CM to register their protest against attacks on BJP leaders by the farmers at Rajpura and Barnala. BJP leaders, Bhupesh Aggarwal and others who were taken hostage with family members by protesting farmers in a house in a Punjab town, were rescued early Monday by police after an over 12-hour ordeal and with the intervention of the high court.

However, the police denied he was attacked. A police team led the Deputy Inspector General Vikramjit Duggal was at the spot to rescue and escort the hostage leaders to safety. The situation throughout the night remained tense. The rescued leaders claimed that the farmers chased, abused and heckled them. Also their vehicles were pelted with stones.

Protesting BJP leaders claimed that law and order situation in Punjab has marked to a new low where no one is safe. They blamed the state Congress government for supporting the agitating farmers and giving them free hands to attack on BJP leaders.