"Sometimes it becomes very difficult to get in": Ravi Shastri on non-selection of Suryakumar Yadav

Ravi Shastri appealed to Suryakumar Yadav to not get disappointed instead remain positive. 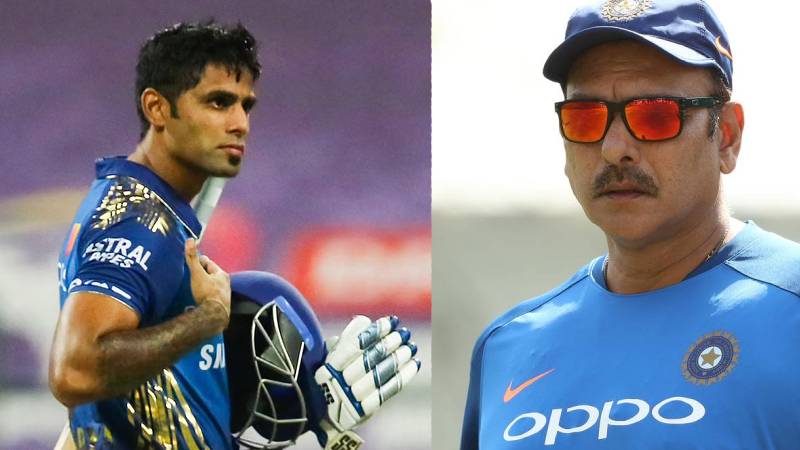 The selection committee of the Board of Control for Cricket in India (BCCI) came under the heat of social media after it ignored the Mumbai Indian's player Suryakumar Yadav. India will be touring Australia for three ODIs, three T20Is, and four Tests, scheduled to be played between November 27 and January 19. Virat Kohli-led Team India will begin the title defense of the Border-Gavaskar Trophy with the pink-ball Test in Adelaide from December 17.

However, in spite of delivering consistent performance for Mumbai Indians and Ranji Trophy he was not selected. Even the greats of Indian Cricket slammed BCCI for not selecting Suryakumar Yadav in the squad. Sachin Tendulkar, Harbhajan Singh, Virender Sehwag many expressed their anger after Suryakumar went un-noticed by the selection panel.

Now, Indian Cricket team head coach Ravi Shastri has responded to it. Talking to Times Now, Ravi Shastri said, "We say to these youngsters to be patient because like Suryakumar there are three-four other players on the fringe. But when you have a team that is packed with talent and experience, sometimes it becomes very difficult to get in."

"I remember a period in my career when one to six Indian batting lineup, everyone was certain of their places and it was very difficult for anyone to penetrate that middle order and yet you had some people who are scoring tons of runs in domestic cricket and knocking that door all the time. So I believe for all these youngsters be patient. When you will get your opportunity grab it with both hands. That's the time you don't mess up. So instead of being disappointed be positive in your mindset when you get the opportunity make the most of it," added Shastri.