The answer to this question is absolutely not. Mouni Roy's character of 'Queen of Darkness' is not a copy Marvel's famous Scarlet Witch. Author : Ujjwal Samrat 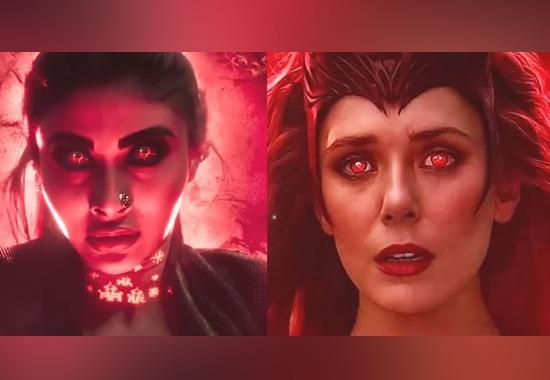 Ace Director Ayan Mukherji's magnum opus Bramhastra finally hit the theaters on Friday. Multi-starrer Bramhastra with Bollywood actor Ranbir Kapoor and Alia Bhatt in the spotlight is receiving some mixed reviews on social media. While film-critic Taran Adarsh has expressed his 'disappointment' with Bramhastra, many fans and media house has called Ranbir Kapoor's film a 'potential blockbuster'. Brahmastra Part One: Shiva intends to serve as the first film in the planned trilogy as a part of its own cinematic universe Astraverse. Bollywood actress Mouni Roy who is portraying the 'Queen of Darkness' in the movie Bramhastra is receiving much praise for her acting from fans, however, few netizens have drawn compared Mouni's character to Marvel's famous Scarlet Witch. Now the question arises Is Mouni Roy character a copy of Scarlet Witch or is Mouni Roy character inspired by Scarlet Witch's character or not?

The answer to this question is absolutely not. Mouni Roy's character of 'Queen of Darkness' is not a copy Marvel's famous Scarlet Witch. However, it might be inspired by Scarlet Witch's appearance, it is not a copy. While Mouni's look might be somewhat similar to Scarlet Witch, the character is not copied at all. Mouni Roy who is playing the character of 'Queen of Darkness' (antagonist) is created by none other than Ayan Mukherji. Not only this, Bramhastra's concept is based on 'Astraverse' not on 'Multiverse' which the Marvels movie generally is based upon. It is said that Ayan Mukherji has made an attempt to create Bollywood's own fictional and fantasy world which is generally being seen in Hollywood movies.

For the unversed, Scarlet Witch is a fictional character of American comic books published by Marvel Comics. The character was created by writer Stan Lee and artist Jack Kirby. Her first appearance was in The X-Men 4 in the Silver Age of Comic Books.

Dog's barks but Queen is going to shine

Today my heart leaps up with joy to witness mouni roy as the antagonist of Bramhastra. I mean what a performer man. She is defiantly the Soul of the movie.television naagin is now part of the biggest budget Bollywood movie ever.i hope teja also gets same work..