Real vs Reel: Is Pippa a true story based on Brigadier Balram Mehta's war memoir on the 1971 Indo-Pak war?

The answer to this question is Yes. Pippa is based on the war memoir The Burning Chaffees authored by Brigadier Balram Singh Mehta. 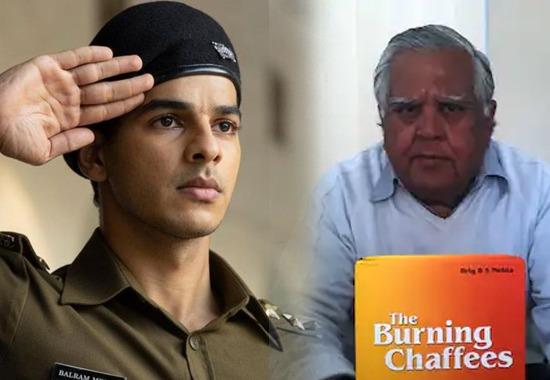 The makers of URI and Rang De Basanti on August 15, Monday unveiled the first teaser of their upcoming project Pippa. Ever since the release of its trailer Pippa has been trending at number 6 on YouTube. Seeing the trailer, it can be said that Pippa is based on the 1971 India-Pakistan war which ultimately led to the creation of Bangladesh. Pippa is a multi-starrer movie including actors like Ishaan Khatter, Mrunal Pandey, Soni Razdan, and Priyanshu Painyuli in the focus. Pippa is directed by Raja Krishna Menon who has previously made movies like Airlift, Chef and more. Now, the question of whether Pippa is a true story or Pippa is a real story or not?

The answer to this question is Yes. Pippa's official trailer caption says that the movie is inspired by true events. Furthermore, Pippa is based on the war memoir The Burning Chaffees authored by Brigadier Balram Singh Mehta. Reportedly, Pippa tells the story of three siblings set against the backdrop of the action-packed 48-hour Battle of Garibpur, which was fought on the eastern front of India during the Indo-Pakistan War of 1971.

Now, another question that strikes fans' mind is why this film is titled 'Pipa'? The answer to this question is Pippa's is a pet name of the Russian tanks which was used by armored tank squadron headed by Balram Mehta. The term 'Pippa' was used for the Russian amphibious war tank PT-76. Pippa is a Punjabi term that means an empty ‘ghee da dabba’ that smoothly floats on water one of the characteristics of the Russian PT-76 tanks.

Pippa's one-minute teaser video features Bollywood actor Ishaan Khatter as Captain (later Brigadier) Balram Singh Mehta, a veteran of the 45th Cavalry Tank Squadron, who went on to fight for Bangladesh. In fact, Mehta headed the tank squadron and ultimately led India to its victory. Pippa is slated to release in theaters on December 2, 2022. Although the film does not consist of big Bollywood stars, the trailer indeed looks intriguing and full of patriotism which can draw the audience back to the theaters. Pippa might also prove to be a career-changing role for Shahid Kapoor's brother Ishaan Khatter.

Real vs Reel: Is Rangbaaz 3 a true story based on Bihar's 'Don-turned-politician' Shahabuddin?