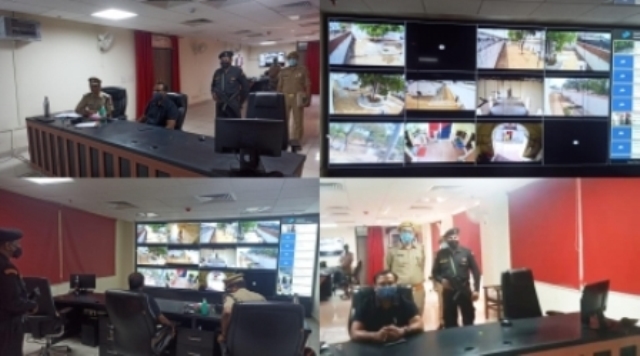 Gangster-turned-politician Mukhtar Ansari, who was shifted from Punjab’s Rupnagar district to Banda jail in Uttar Pradesh on April 6, is now under the scanner of the Yogi Adityanath government round-the-clock.

The convoy that brought Mukhtar reached Banda around 4.30 am on April 7, after which a team of four doctors medically examined him and he was then shifted to the barrack.

Chief Minister Yogi Adityanath then held a late-night meeting with senior officials to monitor the transfer of the accused which was done under full media glare.

The director general, jails, in Lucknow is monitoring the movement of the mafia don in his isolation cell through the CCTV cameras installed there through the 12 screens put up in the office.

A senior official, who spoke on condition of anonymity, said: "This monitoring is being done to ensure that the inmate (Mukhtar) does not enjoy any additional facilities and does not get any unauthorized visitors."

He said that for Mukhtar Ansari, Ropar jail may have been a reformatory but Banda jail will be a jail in the true sense of the term.

He said that the area around the cell where Mukhtar Ansari is lodged is also under the scanner. The official said that the round-the-clock monitoring will also ensure that there is no threat to the mafia don's security.

According to the UP police, Ansari faces 52 cases in the state and elsewhere, and 15 of them are at the trial stage.

The police have, till now, arrested 96 criminals and seized, freed, or demolished property worth Rs 192 crore linked to the BSP MLA and his associates.

Ansari is also the prime accused in the 2005 murder of BJP legislator Krishnanand Rai.

Seventy-two arms licenses linked to him and his accomplices had been suspended and an extortion racket that fed crores of rupees yearly to Ansari and his associates was busted.

Meanwhile, Afzal Ansari, the BSP MP from Ghazipur and brother of Mukhtar Ansari, alleged inhuman treatment was given to him while being shifted to Banda jail from Punjab, saying he was denied medical aid and even no food or water was offered to him in over 15 hours of journey.