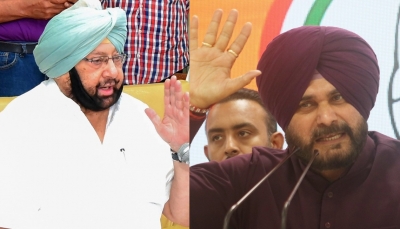 There seems to be no end in sight to Chief Minister Captain Amarinder Singh and former cabinet minister Navjot Singh Sidhu’s ongoing tussle over the 2015 sacrilege case.

In yet another veiled attack at Punjab CM, senior Congress leader Navjot Singh Sidhu shared a 2016 video clipping of Capt Amarinder wherein he can be seen promising to send Badals to jail for Kotkapura firing incident if elected to power. 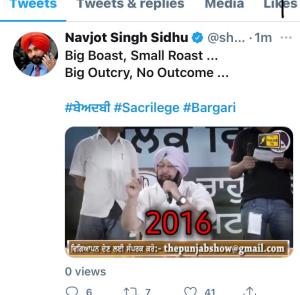 In his another tweet, Sidhu said, “People of Punjab did not elect the High Court Judge, Blaming the Verdict for what is failure of Executive Authority will not be accepted. My Stand Yesterday, Today & Tomorrow - Justice for Punjab’s Soul ... Letter to Jathedar Akal Takht Sahib for Ex-Communication of Badals (2018)”. 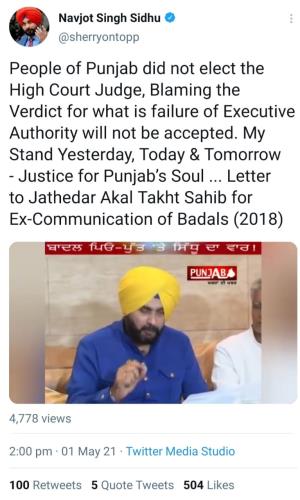 Meanwhile, Navjot Sidhu through both of his tweets made it clear that though his government failed to deliver justice on sacrilege cases, his stand yesterday, today and tomorrow remains the same and he will keep on demanding justice for Punjab’s soul.

In his first tweet, Sidhu compared the statement made by the Punjab CM in 2016 wherein he promised to send Badals to jail if elected to power and the statement recently given to a private channel saying that he cannot do ‘Jatta Shahi’ and simply put Badals in jail and that the law would take its own course and he could not interfere in the SIT probe.

It is also pertinent to mention here that, the Chief Minister breaking his silence over Sidhu’s continuous allegations on him over sacrilege case, has termed Sidhu an "opportunist".

Capt Amarinder also challenged Sidhu to contest against him from Patiala and meet the fate of General J.J. Singh who had lost his security deposit.

In his two interviews to private channels, Capt Amarinder hinted that Sidhu is not clear in which party he was and that he was allegedly in talks with AAP chief Arvind Kejriwal and has plans to switch party.

In addition, even Congress MLA from Jalandhar Cantt Pargat Singh lashed at his own government during a press conference and said it was a political and administrative failure to provide justice to the families of the victims of the Kotkapura police firing cases. He said he also asked CM Capt Amarinder Singh to fix the accountability for the lapse.

He then further added that Capt Amarinder Singh-led Punjab government’s graph has witnessed a massive decline as the government failed to deliver the promises made in the 2017 elections.

Besides, Pargat also confirmed that his close friend and cricketer-turned-politician Navjot Sidhu has no plans to switch party and all he is concerned about is the justice in 2015 sacrilege cases.