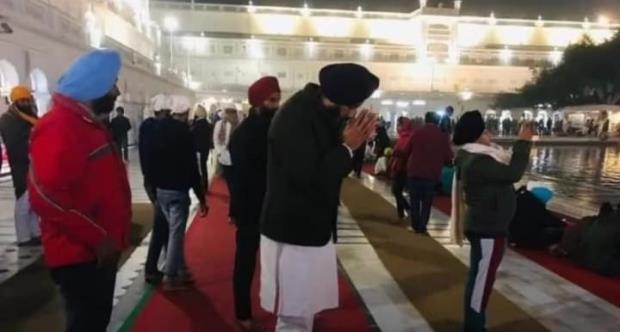 Absconding Shiromani Akali Dal leader Bikram Singh Majithia who has been booked in the drug case was spotted paying obeisance at Golden Temple in Amritsar on the occasion of New Year. His presence at the shrine indicates a major failure of state intelligence and the Channi-led Congress government.
Bikram Majithia had gone into hiding after police filed an FIR against him on December 20, 2021.
Pictures of Majithia at the shrine were posted by the youth SAD Facebook account which went viral on social media, causing a stir in the police department as well as the Charanjit Channi government. Police are now raiding residents of Majithia in Amritsar and that of his close confidants. However, teams are yet to apprehend the leader.
Police have erected barricades across the state in order to nab the leader. However, his presence at the Golden Temple on January 1 could also be an indication of sabotage from inside the department.
Earlier sacrilege attempt at the shrine and now Majithia paying obeisance raises several questions on the credibility of state intelligence positioned around the Golden Temple to look over the security operations.
Senior Akali leader Virsa Singh Valtoha, on the other hand, said that Bikram Majithia, every year visits Golden Temple to mark the new year. He, however, did not clarify that whether the viral pictures are of January 1, 2022.
The leader went on to say that PPCC chief Navjot Sidhu and CM Channi have left no stone unturned to misuse their powers and position for wreaking vengeance upon its political opponents. He challenged the Congress top brass to fight Majithia in polls and not file “frivolous drug cases” against him.
Meanwhile, the Charanjit Channi led Punjab government has once again failed to deliver justice in the drug case. Navjot Sidhu, on the other hand, is likely to again target his own government over the matter.
Earlier, Sidhu questioning “where is Majithia,” remarked that "registering FIR is not enough."
"I won't be silenced until Majithia is apprehended", said Sidhu, adding "an FIR was lodged against some leaders in sacrilege case almost six years ago. We're all aware of how that turned out."
Bikram Majithia’s anticipatory bail plea remains pending in the Punjab and Haryana High court as the body has adjourned the hearing to January 5. The SAD leader on December 27, 2021, had moved to the High Court seeking anticipatory bail. His counsel, Damanbir Singh Sobti and Arshdeep Singh Cheema argued in the petition that "targeting the applicant/petitioner is one of the major election planks of the current government" in Punjab.
Also Read: Majithia drug case: HC adjourns SAD leader’s anticipatory bail hearing to Jan 5
The plea further read “he(DGP Chattopadhyaya) has been appointed, as is well known, to please the Punjab Pradesh Congress President Navjot Singh Sidhu, the arch political rival of the petitioner, and….to act as a tool to advance the political interests of the present government”.
Majithia was earlier denied anticipatory bail by Mohali court on December 24.
The 46 year old leader was booked last week under the Narcotic Drugs and Psychotropic Substances (NDPS) Act, based on a 2018 report from a Punjab drug investigation.
Majithia is the brother-in-law of SAD chief Sukhbir Singh Badal and the brother of Harsimrat Kaur Badal, a former Union minister. Majithia had previously refuted all of the charges levelled against him. The registration of the FIR against Majithia was called "political vendetta" by the Shiromani Akali Dal.
The FIR against the senior SAD leader has been filed just months ahead of crucial Punjab elections. The development is likely to have a negative impact on the vote bank of Shiromani Akali Dal in the upcoming elections.