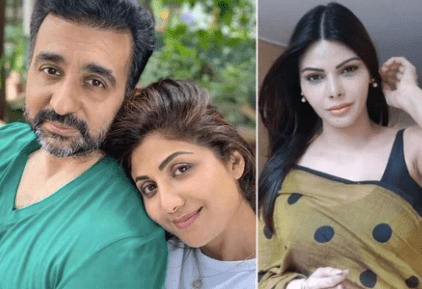 After her interrogation, she informed gathering reporters that she was probed about her association with Raj Kundra, who has been placed in judicial custody for his suspected involvement in the pornography case, through his former firm Armsprime and his app HotShots.

"They asked me about my deal with Armsprime and what the terms and conditions of the contract were," Sherlyn Chopra said, according to a leading daily. "They even asked me about how many films I filmed with them and who all were a part of the content creation.”

They also asked, 'Raj Kundra ke sath mere kaise sambandh they and do you have any knowledge regarding the other companies controlled by him'. The information was shared for the entire day. Even though I asked if there were any further questions, please ask them because I want justice for all the women and artists who have been victims of this pornographic racket.’

She also came out against Rakhi Sawant, a former Bigg Boss competitor, saying that Rakhi shouldn't make 'generic' remarks regarding the matter. "People like Rakhi Sawant, who come up and say Raj Kundra is this and Shilpa Shetty is that, 'Jai Jai Kaar karte hain,' should learn that they shouldn't make such broad claims without examining the facts," she added.

She had previously spoken out against Poonam Pandey, who voiced her support for Raj's wife, actor Shilpa Shetty, for having been involved in the matter.

Actress Shilpa Shetty recently broke her silence on the matter, requesting privacy for her family in a social media message. Raj's next plea will be heard on next date in August.