Sambhavna Seth lost her temper as she shouted at a police official for jostling her husband Avinash Dwivedi. Many videos of the instance have come to fore 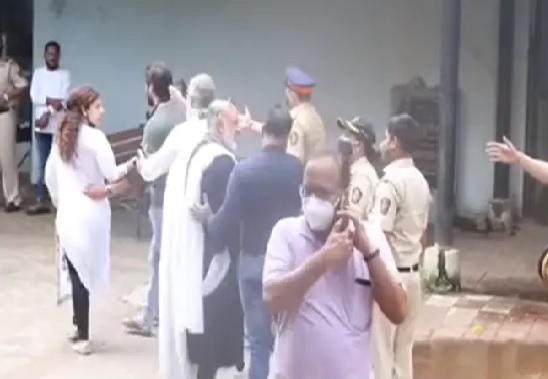 It was a sad day in the entertainment world as film and TV personalities gathered at Mumbai's Oshiwara crematorium to bid farewell to one of their own, Sidharth Shukla. The popular TV actor died of a heart attack on the morning of September 2 at the young age of 40. His death came as a shock to the whole country as he was one of the fittest actors in the industry who was known to take very good care of himself.

Actor Sambhavna Seth got into a brawl with the police in Mumbai after her husband Avinash Dwivedi was manhandled by one of the officials on Friday. The incident took place at the Oshiwara Crematorium where the last rites of Sidharth Shukla were performed. Several videos of the incident have surfaced online showing Sambhavna screaming at the cops.

In one of the videos shared on Instagram, Sambhavna Seth along with Avinash Dwivedi stood near a gate with their friends, surrounded by a group of police officials. Sambhavna walked away from the gate and at the same time a scuffle broke out. In the clip, a cop held Avinash by his T-shirt then pushed him back with his hand on his face. Sambhavna then rushed towards them.

The mood there was mostly sombre, except for the time TV actress Sambhavna Seth and her husband Avinash Dwivedi got into a heated argument with the police personnel inside the crematorium. A visibly agitated Sambhavna was heard shouting using profainities at the cops, while her husband tried to diffuse the situation.

The argument continued with Sambhavna asking the cop repeatedly, "Aapne kameez kaise pakda hai (How could you hold him by the T-shirt)?" The argument ended with the group making their way towards the crematorium.

Fans came forward to support Sambhavna. A fan took to the comments section of the video and said, "Policeman had hit Avinash sir for no reason. Anyone would have fought against it." Another person commented, "How could he hit him????" A user also said, "Feeling bad for them."

Sambhavna Seth and Avinash Dwivedi were attending the last rites of Sidharth. The actor died on Thursday at the age of 40. He was declared dead on arrival at the Cooper Hospital in Juhu. He was cremated in the presence of his family, friends and colleagues.