Akshay Kumar's period drama 'Samrat Prithviraj' has turned out to be a commercial disaster as the film has earned a measly total of Rs 55 crore at the domestic box office against its massive reported budget of Rs 200 crore. 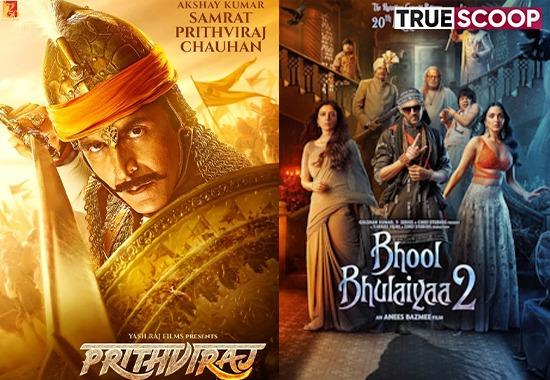 When Akshay Kumar's much-loved film Samrat Prithviraj reached the theatres on June 3, trade analysts estimated that Kartik Aaryan's film Bhool Bhulaiyaa 2 would hit the business and the film would be reduced around 150, but Samrat Prithviraj's Failure has become an opportunity for Bhool Bhulaiyaa 2 and now the big collection is expected from the film, as after Samrat Prithviraj till 'Jugjugg Jeeyo' no Bollywood film is releasing which will give competition to Bhool Bhulaiyaa 2.
On 10 June 'Janhit main Jaari' was released, in which Kartik Aaryan's first leading lady Nushrratt Bharuccha is in the lead role, but there is little hope that the film might steal the audience of Bhool Bhulaiyaa 2.
Also Read: Samrat Prithviraj Review: Why you should watch THIS movie, did Akshay's film perform better than 'Vikram'?
In the third week of Bhool Bhulaiyaa 2, the box-office collections reports that there is interest among the audience for the film. The film collected 2.11 crores on June 10 (Friday). With this, the net collection of Bhool Bhulaiyaa 2 for 21 days now stands at 167.34 crores.
Akshay Kumar's period drama 'Samrat Prithviraj' has turned out to be a commercial disaster as the film has earned a measly total of Rs 55 crore at the domestic box office against its massive reported budget of Rs 200 crore, something which is a part and parcel of a period film given the heavy production design, VFX and era-specific costume design.
After this collection, it is now believed that the net collection of Bhool Bhulaiyaa 2 can reach 175 crores. Karthik started the third week on June 3 with 2.81 crores. On Saturday and Sunday, the film's collections jumped and collected 4.55 and 5.71 crores respectively. After this, 2.25 crores were deposited on Monday and 2.16 crores on Tuesday.
Bhool Bhulaiyaa 2 is directed by Anees Bazmee. Kiara Advani and Tabu have played important roles in the film. This is the biggest success of Kartik Aaryan's career. Earlier, he entered the 100-crore club with his film Sonu Ke Titu Ki Sweety. With this collection, Bhool Bhulaiyaa 2 has also been included in the top films of this year. Talking about worldwide collections, the film has grossed 200 crores.