The purpose of the meeting was to discuss the state of education with the Punjab Youth Leaders (Common Education) and all the BMTs so that the education system of the district could be understood effectively.  At the beginning of the meeting, Simranpreet Oberoi, the founder of the organization, highlighted the three-year journey and purpose of Sanjhi Sikhia. 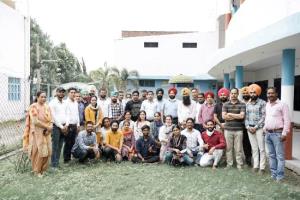 At the same time, Sanjhi Sikhya team along with parho Punjab, parhao Punjab team organized a digital capacity building session on Google Slides, which was highly appreciated by the entire team.

Also read: Schools to reopen in these states from tomorrow, Check List Here

Praising the work of Sanjhi Sikhya, the Deputy DEO wished for better contribution of the organization for positive change in the field of education. Eleven young leaders, Sanjhi Sikhiya program team, parho Punjab, parhao Punjab team were present in the meeting.