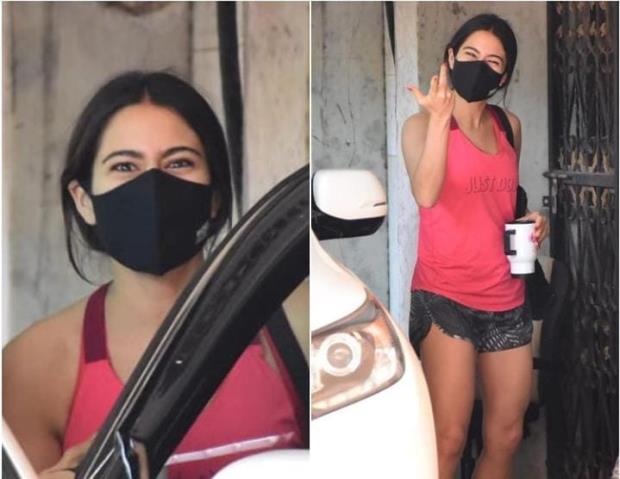 Actress Sara Ali Khan has a reason to rejoice as her much-awaited film Atrangi Re is all set to release soon on Disney+Hotstar. On Tuesday afternoon, Sara unveiled the character posters from the film and announced that the trailer will be out tomorrow. In the midst of it all, Sara was spotted at her Pilates class by the paparazzi and well, it seems that even her workout couldn't dampen her mood as she exited with a smile.

The gorgeous star was seen making her way out of her Pilates class in athleisure. With a smile on her face, Sara waved to the paps from a distance and kept her mask on amid the ongoing pandemic. Sara is seen clad in a pink top with grey jogger shorts in the photo. She is seen sporting a black mask as she walked out of the class. Sara was also seen carrying a white mug of her favourite beverage as she headed home after her workout.

On Tuesday, after Sara launched the motion posters featuring her, Dhanush, and Akshay Kumar in Aanand L Rai's Atrangi Re, fans were excited about the film. The film has been awaiting a release and finally, it is set to drop on Disney+Hotstar. Atrangi Re reportedly stars Sara in a double role and Akshay in a special role. It is backed by Bhushan Kumar and the story is penned by Himanshu Sharma. The film's trailer is all set to drop tomorrow and the release date is yet to be unveiled.