This is a film in which all the mistakes of the script get lost in the noise of its protagonist. 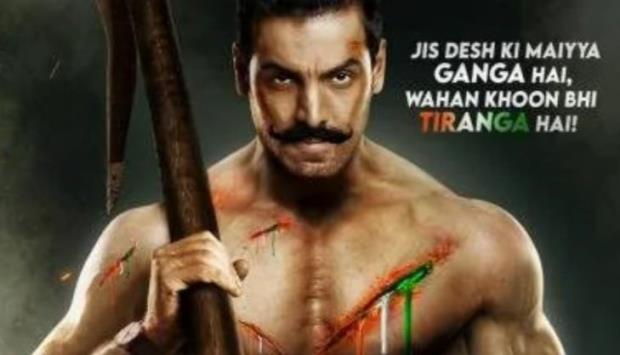 Today marks the release of John Abraham's mass entertainer in theatres. The film is the first installment of the 2018 film Satayamev Jayate, which earned a lot of critical acclaim and public appreciation, prompting the film's creators to develop a sequel.

The film was announced much before the pandemic, but thankfully, witnessed the day of light on the big screen. Starring John Abraham and Divya Khosla Kumar, the film has secured a good screening for itself across the country.

The name of this film is not John, Johnny, Janardan but you will remember Satyamev Jayate 2 for three Johns on one ticket. It is an action-packed movie, full of ‘masala, masala and masala’. The film is written and made in the style of the 1980s. Writer-director Milap Zaveri and his team have left no stone unturned to preserve and maintain the same theme as of ‘Styamev Jayate’. The film 'Satyamev Jayate 2' is a tribute to Manmohan Desai in a way. This is a film in which all the mistakes of the script get lost in the noise of its protagonist.

Bollywood celebrities are also impressed by the film Satyameva Jayate 2. Genelia D'souza tweeted, "#SatyamevaJayate2 is the kinda film that reminds you how proud of you are to be Indian.. Whistles, Mass, Fights, Romance, Patriotism to its peak..Well Done @MassZaveri sooo proud of you.. @TheJohnAbraham you were so so good so good and OMG that body.”

“@divyakhoslakumar we need to see you a lot more on screen .. You were an absolute breath of freshness .. @norafatehi you are just amazing @monishaadvani I love you and you back talent so amazingly and effortless along w @nikkhiladvani @madhubhojwani .. Need more of you,” she added. 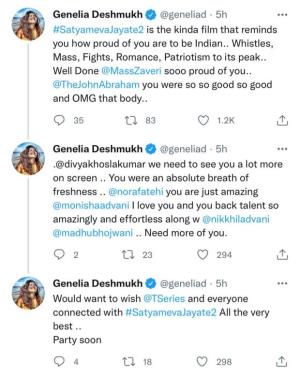 Overall, if you like masala movies, watch ‘Satyamev Jayate 2’ in theatres and enjoy watching John Abraham in three roles.