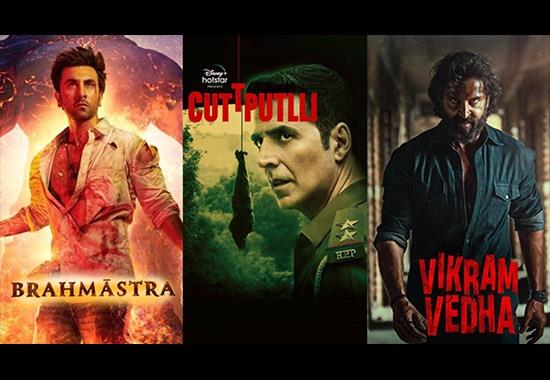 If you are someone who loves watching Bollywood Movies and is a true fan of Hindi Cinema then September is the month that will keep you on the edge of your seat as it is all ready to give you some major blockbusters.

Alia Bhatt and Ranbir Kapoor starrer Brahmastra is one of the most talked about movies since the time it has come to the fore. Ayan Mukherjee will be introducing the ethereal Astraverse often known as many astras. The film is all set to release on 9th September 2022. It is one of the first kinds of a movie to be ever made in Bollywood.

The upcoming film ‘Babli Bouncer’ starring Tamannaah Bhatia is all about a female bouncer who struggles all her way to survive in the male dominant business. The movie is directed by Madhur Bhandarkar and will be released on 23rd September 2022 only on Disney Plus Hotstar.

The most awaited film of Bollywood, Vikram Vedha is all set to release on the big screens on 30th September 2022. It is a story of a snooty clash between a gangster and a police officer. The film will star Hritik Roshan, Saif Ali Khan and Radhika Apte. Don’t forget to mark the release date on your calendar. Vikram Vedha is a remake of a 2017 Tamil Fil consisting the same title.

Bollywood actors Akshay Kumar and Rakulpreet Singh are all set to bring a spine-chilling thriller movie to you on the 2nd of September and will stream on Disney Plus Hotstar. uttputlli follows an interesting and remarkable path of detecting the psychology of a serial killer. This amazing thriller movie is being produced by Vashu Bhagnani and directed by ‘Bell Bottom' fame Ranjit M Tiwari.

It is a women-centric film directed by Manish Mundra. The movie is about a small-town girl who chooses to fight against the patriarchal sociey and faces a lot of hurdles in doing so. Vineet Kumar Singh from Rangbaaz and Pooja Pandey will be starred in this film. The movie will come to your big screens on 16th September 2022.

Be all set to book your days watching some of the breathtaking movies that will be brought to you by the Hindi Cinema.