After the National Green Tribunal removed its restriction on mining activity in the region, large-scale mining activities have begun in the Dadam mining area and Khanak Pahari. 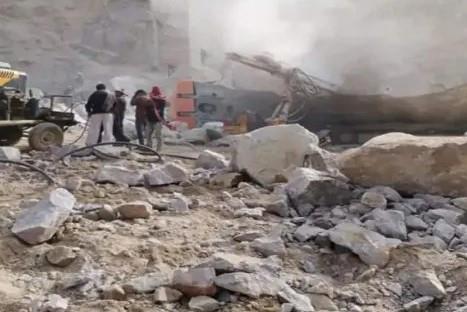 Following a landslide in a mining zone in Haryana's Bhiwani district on Saturday, at least two persons killed and numerous more are believed to be trapped. At the Dadam mining zone in Tosham block, the district government has begun a rescue mission.
Manohar Lal Khattar, the Chief Minister of Haryana, stated that he is in close contact with the local authorities to ensure fast rescue efforts and urgent help to the wounded.
The workmen were apparently on their way to another job site when the avalanche occurred, trapping them in their trucks.
PTI news agency cited a police officer as saying , "At least two people have died in the incident."
JP Dalal, the Agriculture Minister, has arrived on the scene to supervise the rescue effort. "A few people have lost their lives and three persons have been taken to a hospital. According to the mining contractor here, there could be three-four more people trapped inside," he stated.
After the National Green Tribunal removed its restriction on mining activity in the region, large-scale mining activities have begun in the Dadam mining area and Khanak Pahari. The two-month restriction issued by the green court due to pollution was lifted on Thursday, but mining operations did not begin until Friday.