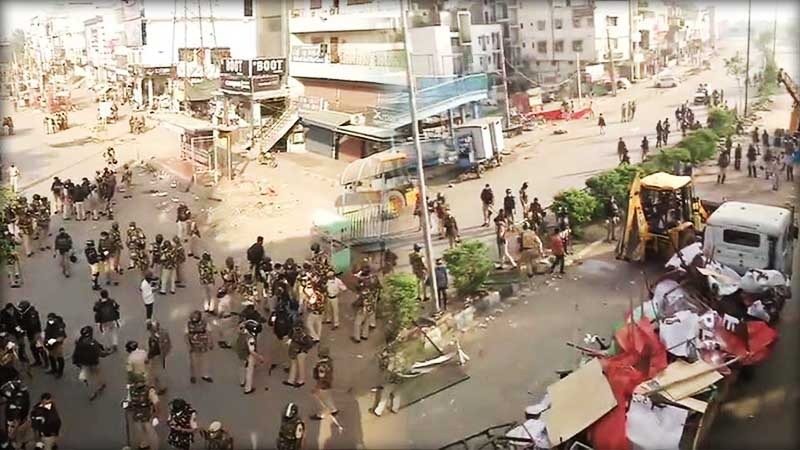 The 101-day long Shaheen Bagh protest that was termed as 'heart of anti-CAA protests in India', was cleared by the Delhi Police on Tuesday morning at around 7 O'clock.

Police say the site had to be cleared following the outbreak of COVID-19 and the curfew imposed in Delhi to stop the spread of the deadly virus.

According to the police, no force was used during the process, however several protesters, who refused to leave the venue despite continuous persuasion, had to be taken into detention.

Deputy Commissioner of Police R.P. Meena said, "Police requested them to vacate the place but they refused. So, police cleared the area and detained a few protesters."

The Delhi Police also said, "All protest sites have been cleared -- Jaffrabad, Jamia and Turkman Gate. Some persons have been detained at all these places as well."

The agitation at Shaheen Bagh began on December 15 after the police action in Jamia Millia Islamia where the police allegedly used force against the anti-CAA protesters in which many students were injured.

According to the locals of Shaheen Bagh, police reached the protest site at around 6.45 a.m. and asked the protesters to vacate the site citing the curfew but they refused which led to their detention.

"We were following precautions for protection against COVID-19, only five of us were sitting on the site but they (Delhi police) did not allow us to protest. They have removed us forcibly," one of the lady protester said.

Another local of the area echoed her views and said: "They came out of nowhere and since it was early morning only a few protesters were present at the site. Now when the site has been cleared they have deployed heavy force here," Shahrukh, who lives about 250 metres away from the protest site, told IANS.

Meanwhile, the site remains heavily guarded by police force to stop protesters from assembling again, however the road connecting Noida to Delhi is still not open for public because of the ongoing curfew in the national capital.

According to officials in South Delhi Municipal Corporation (SDMC), the civic body will now clean up the site and try to repair the damage. The Public Works Department will also carry out the repair and cleaning process.

Shaheen Bagh had become a symbol of anti-CAA protest and was replicated in some other parts of the country. However, amid the fear of COVID-19 spread, protests at other places were also called off.

Shaheen Bagh protesters had tweeted on the day of the Janata Curfew after a petrol bomb was hurled at the barricades, "We are committed to cooperating with the law of the land and request all our well-wishers and sympathizers to abide by the same. We are all in this together. We will come back stronger. This is not over.

"In spite of all this, and in line with the State directives issued to contain the #COVID 19 threat facing our nation, we bravely continue our protest today with only five women protesters marking their resistance on behalf of all of us at Shaheen Bagh," the protesters had said on Sunday.