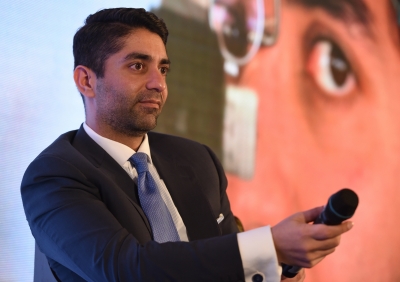 India's only individual Olympic gold medallist, Abhinav Bindra, on Monday questioned the continuation of Indian Premier League (IPL) when the Covid-19 pandemic has virtually crippled India, saying Indian cricketers and officials "can't just live in their own bubble, and be totally deaf or blind to whatever is going on outside".

Bindra, who won the 10-metre air rifle gold at the 2008 Beijing Olympic Games, also wondered why the Indian cricket board, worth Rs 14,489.80 crore, the richest in the world, hasn't contributed so far to the Covid cause, like vaccination during the current wave.

"Cricketers and officials can't just live in their own bubble, and be totally deaf or blind to whatever is going outside," he wrote in a hard-hitting piece for a English Daily.

"I can only imagine that while you're having these IPL games, outside the stadium you have ambulances going to hospitals. I don't know how the coverage on TV is but I would really appreciate if it's a little bit muted in nature. I think celebration and everything around it should be at a minimum because you have to show a little bit of respect to society," wrote the 38-year-old ace shooter.

The Zirakpur-based Bindra, who is a member of the International Olympic Committee's (IOC) Athletes' Commission, came down heavily on the Board of Control for Cricket in India (BCCI), worth Rs 14,489.80 crore as per its latest 2018-19 balance sheet, for not rising to the occasion and being counted.

"Secondly, if I was the BCCI president and had the capability -- and I understand the IPL is not a charity -- I would definitely give a large amount to do, say, the vaccination right or help out in any other way. This is one way to acknowledge that to conduct IPL right now is a huge privilege and everyone should act responsibly," wrote Bindra, without mentioning the name of BCCI president Sourav Ganguly.

So far, four players -- Ravichandran Ashwin, Adam Zampa, Kane Richardson, and Andrew Tye -- have withdrawn from the IPL for "personal reasons" as the number of Covid cases in India continue to go up.

Kolkata Knight Riders' Australian fast bowler Pat Cummins also briefly touched upon the issue of conducting IPL in a time like this while announcing that he was contributing $50,000 to the PM CARES Fund of India.

After matches held in Mumbai and Chennai, the IPL moved to Ahmedabad on Monday while Delhi, which is gasping for oxygen and beds in hospitals or Corona patients, is scheduled to host eight IPL matches starting Wednesday. So far, the BCCI has not announced any change in the original IPL schedule, though Hyderabad and Indore are standby venues.

A "completely devastated" Bindra said that there has been a "complete breakdown of our medical system" and pointed out that it goes on to show that we do require a lot more investment in healthcare. He also referred to "excessive nationalism", and specifically pointed out a comment of former Commonwealth Games and Asian Championships gold medallist wrestler Yogeshwar Dutt.

"And as citizens, we need to follow the rules. The one basic element of sports is to play by the rules. This is why I got frustrated with wrestler Yogeshwar Dutt's tweet. What he said about the Kumbh Mela and the references to a certain section of society is something we do not need at the moment," Bindra wrote.

Bindra said that everyone should come together and show solidarity and kindness towards one other. He also wondered why Indian athletes do not speak up on crucial issues.

"Sportspersons in India have been criticised for not speaking up on issues of national interest, or saying things that do not upset the establishment. This isn't a recent trend and it's hard to argue against it. I don't know what stops Indian athletes from expressing their thoughts freely, maybe it is the fear of repercussions. But I don't know why the fear would exist because sport is largely meritorious in nature. If you are good enough, nobody can stop you from competing," said Bindra.

"Many athletes have had great achievements and are heroes in their own right. But we are not saving any lives. So let us keep our achievements in the right perspective, look at what is happening around us, look at all the frontline workers and their efforts to save lives. They are the real heroes. So if we have the possibility of helping out in whatever way we can, we should do it," he said.

Bindra clarified that there could be positives as well of the IPL.

"There is so much negativity right now, as people and as a nation, that we also need an outlet to keep us going. So, that is one element which is very positive," he said.

"The players should realise just how privileged they are to be able to play the IPL in these times. So, I just hope everybody involved in the IPL play their part in one way or the other, either through right messaging - like the importance of masking up, the importance of social distancing - or even finding creative ways to amplify the health requirements of people," the 2006 World Championship gold medallist wrote.