“Congratulations my everything, I know you getting my wishes in heaven. Love you so much. CONGRATS SIDHARTH SHUKLA” wrote one of the fans. 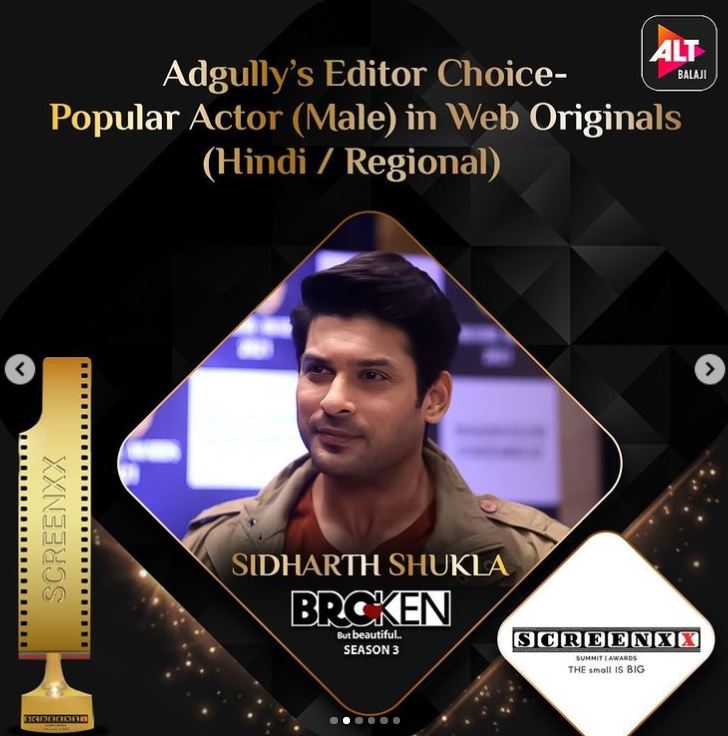 On Friday, late actor Sidharth Shukla is awarded posthumously for his role as Agastya Rao in his last web series Beautiful But Broken 3. He was awarded “Popular actor (male) in web series” by SCREENXX.

It was released on May 29 on Alt Balaji. It was the third season of a popular franchise which is produced by Ekta Kapoor. Sidharth was featured as Agastya Rao, who was a struggling writer-director.

The good news was shared by Alt Balaji on social media, with a caption, “Time for celebration! Thank you #SCREENXX for honouring us with so many awards. We’re overwhelmed.”

After the award was announced Sidharth’s fans – SidHearts, were both happy and emotional. They all shared their feelings on social media and Twitter was over-flooded with their wishes for the late actor, even his industry colleagues were mighty impressed with Shukla’s win. Netizens also trended #SidharthShukla and #BrokenButBeautiful3 on the micro-blogging site to show their love.

A fan wrote, “The Winner has won another award @sidharth_shukla #SidharthShukIa CONGRATS SIDHARTH SHUKLA,” while another wrote, “The size of his success was dependent on the depth of his desire. The desire for aiming high, giving best, desire for winning and here the result of the tremendous effort of Champ @sidharth_shukla. Simply he deserves every bit of it. CONGRATS SIDHARTH SHUKLA for this new milestone.”

The third netizen tweeted, “Broken but beautiful ka real meaning ab samjhi Heart exclamation not lying but when I binge-watched this series, I had a feeling Sid and Sonia will sweep all the awards for this series... Undoubtedly this show belonged to you man & u deserve this. CONGRATS SIDHARTH SHUKLA #BrokenButBeautiful3”.

Have a look at the reactions of netizens here: