On Wednesday, Prime Minister Narendra Modi’s convoy was stopped by protestors during his visit to Ferozpur, Punjab. 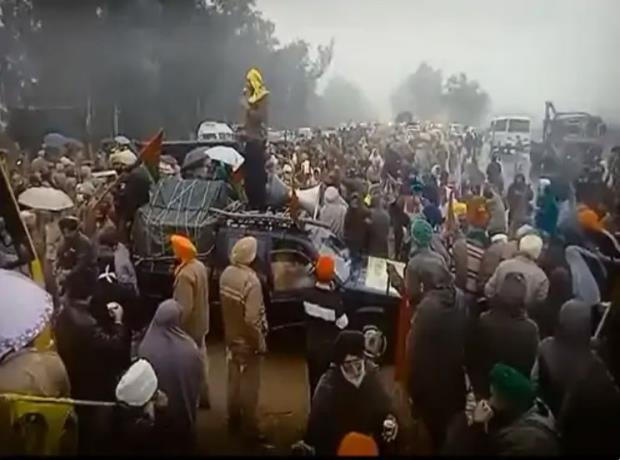 Today, on Thursday, Samyukt Kisan Morcha (SKM) has said that “farmers were not aware of the PM’s route”. SKM has further mentioned that farmers or farmer organisations have not been involved in a security breach in Prime Minister Narendra Modi’s visit to Punjab.
SKM has alleged that threat to the life of PM is totally concocted as only people raising the “Narendra Modi Zindabad” slogan were allowed to reach near the convoy.
Also Read: Sonia Gandhi asks CM Channi to take “strict action”, following PM’s security breach
“It's clear from video of the occasion that protesting farmers didn't even make any effort to go towards PM's convoy. Only a group with the BJP flag & raising the "Narendra Modi Zindabad" slogan had reached near that convoy.  Therefore, the threat to the life of PM seems completely concocted,” SKM leader was quoted saying.
It further said that farmers did not have any information about PM Modi’s route. “Some farmers were stopped by police from going to Ferozepur Dist HQ, they protested by sitting on the road at many places. Of these, was that flyover too where PM's convoy came, stopped & went back,” SKM said, adding, “Farmers there had no concrete info that the PM's convoy was going to pass through”.
Also Read: Watch: Rakesh Takait said PM saying 'He Survived' was a Political Stunt!
“On receiving the news of PM Modi proposed visit to Punjab on January 5, 10 farmer organizations affiliated to the Samyukta Kisan Morcha had announced a symbolic protest for the arrest of Ajay Mishra Teni and other outstanding demands,” Kishan Morcha continued. “For this purpose, programmes of protests and effigy burning were announced at the village level across Punjab on January 2 and at the district and tehsil headquarters on January 5. There was no programme to stop the Prime Minister’s visit or obstruct his programme,” it added.
On Wednesday, Prime Minister’s rally had to be cancelled in Ferozpur after his route was blocked by some protestors. This roadblock forced PM Modi and his convoy to spend about 20 minutes on a flyover.