Watch: Smriti Mandhana and teammates dances to the viral ‘In Da Ghetto’ song

In a recent Instagram video, Jemimah Rodrigues and other players of the India Women's Cricket Team can be seen swaying to the popular song 'In Da Getto.’ 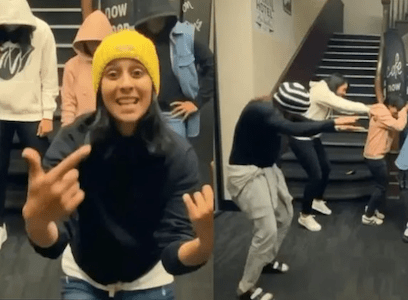 On Tuesday, Jemimah Rodrigues went to her official Instagram account to share a video of herself and fellow teammates Radha Yadav, Smriti Mandhana, Poonam Yadav, and Indian T20I captain Harmanpreet Kaur grooving to the popular music 'In Da Getto.' The cricketer performed the 'In Da Getto' real with the entire team, Rodrigues captioned the video. All of the players mentioned above are presently participating in the Women's Big Bash League 2021 for their respective franchises.

Also Read: Watch: When Roger Federer tagged Virat Kohli, threw 'Tennis at Home' challenge
Cricket fans and other members of the India Women's cricket team reacted positively to the Instagram video uploaded on Tuesday. Harleen Deol, an Indian cricketer, praised the video and welcomed Harmanpreet Kaur to the group in the comments section. Rodrigues frequently shares clips with Indian cricketers on her Instagram account, but this was the first occasion they were joined by the T20I skipper.
Also Read: T20 World Cup: #BoycottPakistan trends on social media ahead of Indo-Pak clash
Meanwhile, a user congratulated Rodrigues on making Smriti Mandhana dance, stating that Rodrigues could now add this accomplishment to her CV now.
In the 2021 season, Jemimah Rodrigues made her WBBL debut for the Melbourne Renegades. Harmanpreet Kaur, like Rodrigues, has joined the Renegades ahead of the current season. Rodrigues top-scored for the squad with 33 runs in WBBL 2021 match no. 2, while Harmanpreet Kaur hit 24 runs off 19 balls and won the match for her side against Hobart Hurricanes.
The defending WBBL winners Sydney Thunder, on the other hand, have recruited Indian opener Smriti Mandhana ahead of the tournament. She previously played for the Brisbane Heat, but in her Thunder debut against the Adelaide Strikers, she had a mediocre effort, scoring only four runs and returning to the pavilion. Meanwhile, Radha Yadhav grabbed headlines with a spectacular one-handed catch during Sydney Sixers' second WBBL match versus Hobart Hurricanes. She also contributed two crucial wickets as the Sixers went on to win the match.
Hobart Hurricanes signed Poonam Yadav for the 2021 season, although she has yet to play her first match.