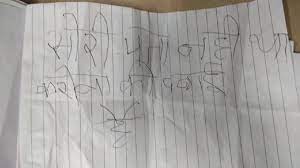 A thief surprised police and authorities after he showed a massive act of humanity, he returned the packets of a vaccine shot with a note which said, "Sorry, pta nahi tha ismai corona ki dawayi hai (Sorry, I was not aware these packets contains coronavirus vaccine)."

As per DCP Jind, Jitendra Khatkad, an unidentified man left a bag near the tea stall, in the afternoon, near the Civil Lines Police Station. The man claimed that the bag contains food packets for the tea stall. But, when police officers opened the bag there was a note and the packet of vaccines.

As per the reports, there were so many vaccines and other objects in the storeroom but the thief did not take them away.

No arrest has been made, this act sets a perfect example of humanity during this critical time when the country is fighting against coronavirus and struggling for beds and lack of oxygen.

Vaccination for all above 18 will start from May 1, the registration for the same from April 28.

Get the latest update about Live, check out more about Current Affairs news, police and authorities, SORRY & Jind Civil Hospital