Hours after his daughter's social media post on Citizenship Amendment Act (CAA) went viral, BCCI President Sourav Ganguly appealed to everyone on Wednesday to keep the 18-year-old out of the controversy.

On Instagram, Sana Ganguly shared a post in the wake of ongoing students' agitation across India against the Citizenship Amendment Act (CAA). However, her father soon went in damage control mode, saying that she is "too young a girl to know anything about politics".

Here What She Posted: 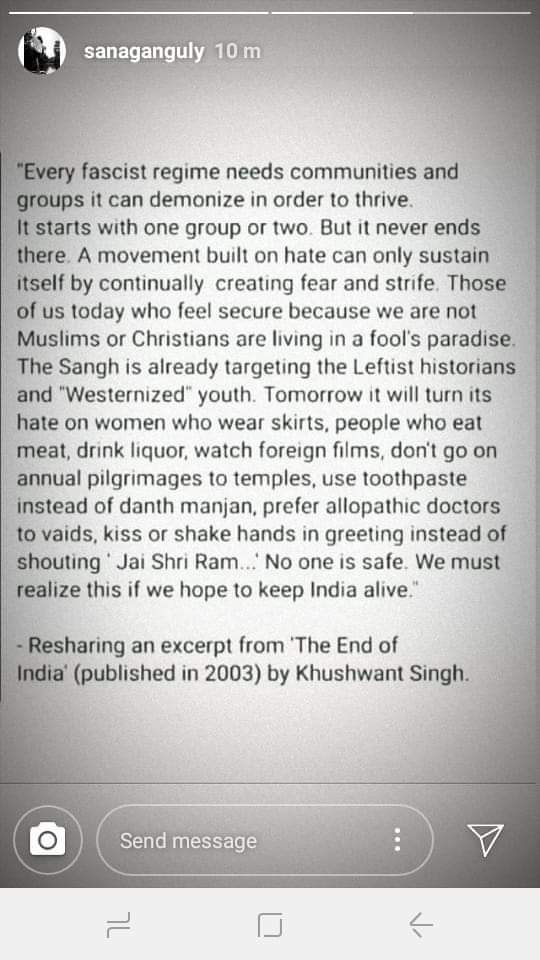 "Please keep Sana out of all these issues, this post is not true. She is too young a girl to know about anything in politics," Ganguly posted on Twitter.

Earlier on Wednesday, Ganguly's daughter has shared an excerpt from Khuswant Singh's 'The End of India' on Instagram and wrote: "Every fascist regime needs communities and groups it can demonize in order to thrive. It starts with one group or two. But it never ends there. A movement built on hate can only sustain itself by continually creating fear and strife. Those of us today who feel secure because we are not Muslims or Christians are living in a fool's paradise. The Sangh is already targeting the Leftist historians and Westernized youth."

"Tomorrow it will turn its hate on women who wear skirts, people who eat meat, drink liquor, watch foreign films, don't go on annual pilgrimages to temples, use toothpaste instead of danth manjan, prefer allopathic doctors to vaids, kiss or shake hands in greeting instead of shouting 'Jai Shri Ram'. No one is safe. We must realize this if we hope to keep India alive," Sana added.

Sana Ganguly's post soon became viral and many people started praising her for her "bold stance" in view of the nation-wide student's movement against Citizenship Amendment Act. Those who praised Sana later lashed out at her father Sourav Ganguly for his tweet.

Meanwhile, anti-CAA rallies are expected in full gear on Thursday even as Section 144 of the CrPC, which prohibits large gatherings, has been imposed across most parts of the country. Police have also issued orders denying permission to scheduled anti-CAA protests in many parts of the country including Delhi.