"I hope the Nykaa journey inspires each of you to be the Nykaa of your own lives," says founder Nayar. 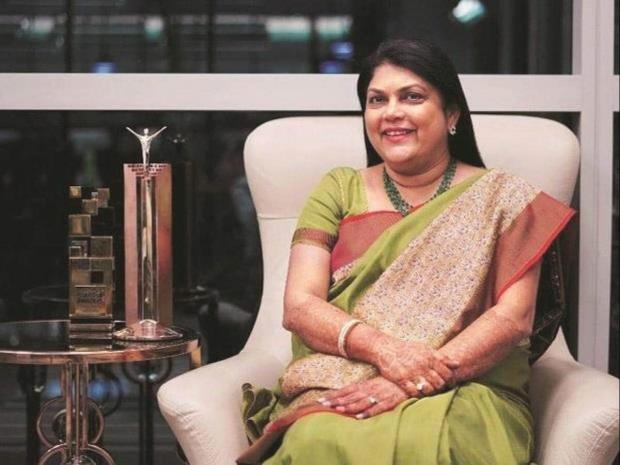 Falguni Nayar's beauty startup Nykaa has rocketed her into the ranks of the world's wealthiest people.

Nayar, who owns approximately half of Nykaa, is now worth about $6.5 billion after the company's shares surged as much as 89 percent when they began trading on Wednesday. According to the Bloomberg Billionaires Index, she has become India's wealthiest self-made female billionaire.

Nykaa's parent company, FSN E-Commerce Ventures, is India's first woman-led unicorn to be listed on the stock exchange. It priced its IPO at the high end of a marketed range, raising 53.5 billion rupees ($722 million).

With this achievement, the 58-year-old Nykaa founder and CEO joins six other women billionaires in India, according to the Bloomberg Billionaires Index.

Nayar, who previously led a top Indian investment bank, founded Nykaa in 2012, just months before her 50th birthday. Back then, most women in the country purchased makeup and hair-care products from local mom-and-pop shops, where the selection was limited and trials were unheard of.

Since then, the startup has grown into the country's leading beauty retailer, boosting online sales with demo videos featuring glamorous Bollywood actors and celebrities and more than 70 brick-and-mortar stores.

"I founded Nykaa at the age of 50, with no prior experience," recalls Ms Nayar.

"I hope the Nykaa journey inspires each of you to be the Nykaa of your own lives," she said ahead of her company's IPO on the New York Stock Exchange (NSE).

Nykaa, which is derived from the Sanskrit word for a heroine, sells exfoliation creams, bridal make-up essentials, and hundreds of lipstick, foundation, and nail colour shades to suit Indian skin tones, skin types, and local weather. According to its filing, its sales increased by 35% to $330 million in the fiscal year ending in March. Nykaa is a profitable company, which is unusual among internet startups making their public market debut.

Nayar's stake in the company is held by two family trusts and seven other promoter entities. Among the promoters is her Ivy League-educated daughter and son, who run various Nykaa units.

While Nayar is India's richest self-made female billionaire, Savitri Jindal is the country's wealthiest woman, controlling the OP Jindal Group conglomerate founded by her late husband. According to the Bloomberg Billionaires Index, which ranks the world's 500 wealthiest people, her fortune is worth $12.9 billion.

Nykaa's IPO is one of many consumer Internet companies that have gone public this year amidst the stock market's strong performance.

While Nykaa has changed Indians' perceptions of makeup beyond lipstick and kajal eyeliner, "we still have a long way to go," Nayar said ahead of the IPO. In this country of 1.3 billion people, women and even men are only now beginning to open their wallets to splash the cash on make-up and grooming products.