“I cannot be a dummy chief who is not allowed to take decisions”. 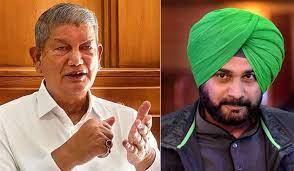 Proclaiming that the state chiefs have legitimate powers to function and take decisions within the set boundaries of the party stand and constitution, Congress general secretary in-charge of Punjab Harish Rawat said in reaction to Navjot Sidhu's "can it be a dummy" remark.
Punjab Congress head Navjot Singh Sidhu on Friday made a statement targeting the Gandhis.
“I cannot be a dummy chief who is not allowed to take decisions”.
On Sidhu’s statement of 'lack of freedom in decision making', Rawat stated: “I can't question him based on media speculation... I will see the context of the statement. He is the party chief, who other than he can take decisions?”
Addressing his supporters in Amritsar, Sidhu stated that if the high command allows him to act according to his own method of “hope and faith”, he will make sure that the Congress party rules Punjab for the coming 20 years.

“But if you don’t allow me to take decisions, then I can’t help anything (itt naal itt baja deyanga)” Sidhu said referring to the Congress high command.

Rawat further said that he will seek time to meet Sonia Gandhi and Rahul Gandhi.
“Congress' stand is very clear that we will not accept any statement that is against the interests of the nation,” Rawat stated clearly.
Wondering who said Sidhu was a dummy of the party, Rawat said he will be looking into the context of what Sidhu had said.

“State chiefs have full powers. They can decide within the party constitution. I will see in what context Sidhu said what he said. So far as what Sidhu’s advisers said, we made it clear that it wasn’t acceptable to the Congress,” Rawat said, as Sidhu’s controversial adviser Malwinder Singh Mali resigned his role on Friday.

This development comes a day after Rawat said that if Sidhu didn’t fire his advisors, then he would.
“I will meet Rahul Ji tomorrow...He (Navjot Singh Sidhu's advisor) has disowned his remark on Pakistan and Kashmir, so the matter ends there,” Punjab in-charge added.