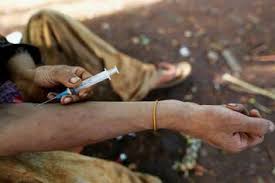 Sending a strong message that laxity in enforcing law and order will not be tolerated, the Punjab Home Department on Thursday suspended five top cops, including an Inspector General of Police (IGP), on account of having ‘links’ with some drug smugglers.

These orders of suspension were issued on a report submitted by the Special Task Force (STF) of the Punjab Police on a police-drug smuggler nexus.

Sources in the Punjab Police informed that in the coming days, the Punjab Government would identify more such ‘Black Sheep’ among the policemen, and a strict action will be taken against them

The CM then during the media interaction boosted having successfully broken the backbone of the drugs chain in the state, which he had actually pledged to do with Gutka Sahib in his hands. However, terming CM’s statement, a ‘U-turn’ on his promise of eradicating drugs, the opposition parties i.e. AAP and SAD targeted Congress government over its failure of eliminating drug menace and said that ‘drugs’ are still openly sold in the markets of Punjab and police are well aware of the fact.

Interestingly, the suspension orders have come at a point when it’s an election year, sources say earlier, in 2017-18, the then STF Chief (who reportedly is now on study leave) had named some senior police officers running this nexus, therefore, chances are Punjab Government would lead this crackdown by hunting down all those involved.

As there were reports that Varinderjit Singh Thind, during the previous SAD-BJP government, provided gunmen to Rano and even invested in Rano’s liquor business, therefore, the probe is on whether the money invested by the suspended cop came from drugs business only, said sources adding that more police officials and politicians are expected to be questioned in the coming days.

“Captain Amarinder Singh is clear on his stand that Punjab Government has zero tolerance policy against drugs, the Punjab Police is committed to eradicate the drug menace from the state”, said sources.

He added that during the first week of March, the DGP Punjab launched a drive against drugs and recovered 16Kg heroin, 35Kg opium, 46Kg ganja, 12 quintals poppy husk and 4.61 lakh intoxicant pills/capsules among other drugs after search operations in drug affected areas beside laying nakas at vulnerable routes across the state”, further adding that 34 Proclaimed Offenders (POs) of NDPS cases were arrested, and soon some big fishes are under the radar.

Get the latest update about Five top cops suspended in Punjab, check out more about DGP Punjab, Police officers having links with drug smugglers in Punjab, Coverage & STF