Taiwan's 5 point military strategy for a possible war against China, 35 Lakh Taiwanese up for Guerrilla war and more, read in detail 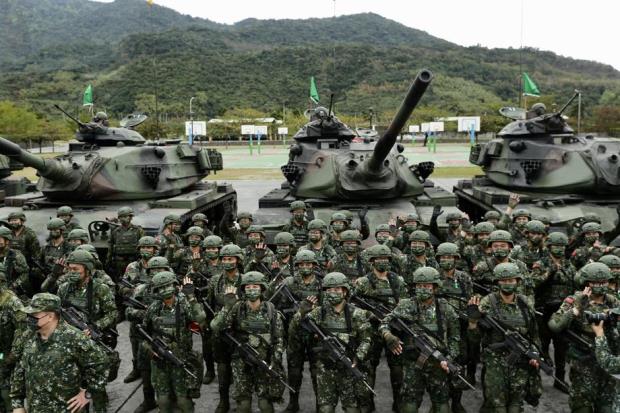 Amid all the threats coming in from China, Nancy Pelosi’s high-profile visit to Taiwan has concluded by promising solidarity to stand for Taiwan’s autonomy. Now many experts believe that outraged by this visit, China might launch an attack on Taiwan. The Chinese security forces have resumed their military drill around Taiwanese territory.
What are the expert’s opinions?
Experts on the matter related to International law believe Nancy Pelosi’s Taiwan visit is a direct challenge to Xi Jinping’s leadership. The 20th Congress of the Chinese Communist Party is scheduled for later this year when Xi Jinping will claim his nomination as the president of China for an unprecedented third successive term.
Pelosi’s visit is seen as a challenge to his chances for the post for this Xi will take the best possible measure against this move. As soon as the US House Speaker departed, China announced the military drill in South-West and South-East water and air space of territory close to Taiwan.
As per the reports from the Chinese News Agency Xinhua, this exercise is likely to continue for over a week. The spokesperson of PLA’s Eastern theatre command Senior Colonel Xi Yi informed during the exercise the Chinese forces will go with long-range fire shooting and will also conduct missile testing.
In this segment of the explainer a detailed elaboration on how will Taiwan stand against the mighty dragon if a war broke out between the two:
Taiwan’s 5-point military strategy against China:
Strategy 1: America’s assistance to Taiwan on Chinese aggression:
Taiwan has been declared a sovereign state by a few countries, most of them see it as a part of China only as the dragon claims. America doesn’t even have diplomatic ties with Taiwan but provides weapons to the island nation through the Taiwan relation act. The act details American support to the nation for self-defence.
In October 2021, American President Joe Biden said, “If China attacks Taiwan, America will jump for its support.” A line that was completely on different terms from America’s previous stand.
Strategy 2: Porcupine strategy; that makes the war expensive and tough for the enemy:
The rift between China and Taiwan is historic. During the 1940s civil war, China and Taiwan separated. Since then Taiwan claims itself as an independent nation, whereas China still sees it as its province. China has publicly talked of a forceful invasion and merging it with mainland China. The threat of attack coming in from China is looming over Taiwan for decades.
Taiwan has taken up the Asymmetric warfare method to tackle the mighty Chinese force, also called as ‘Porcupine Strategy.’ This warfare intends to make war tough and expensive for the enemy.
Taiwan has lined up a huge bulk of Anti-Air, Anti-Tank, and Anti-Ship weapons. Its weapon line-up even includes drones and low-cost warships mobile Coastal Defence Cruise Missile CDCM which are capable of easily destroying expensive Naval ships and equipment.
Though Stealth Fast-Attack crafts and miniature missiles boat is not that expensive but is too efficient military equipment. Taiwan can position them among the boats used for catching fish along its ports. Sea mines and fast mine laying ships can make the task tedious for any offensive naval landing operations.
Also Read; Canadian security agency releases list of 11 dreaded gangsters; No mention of Goldy Brar and Lakhbir Singh
Strategy 3: Multi-layered Sea defence system, capable of keeping an eye on the Chinese fleet.
Taiwan is an island. To launch the attack on it, the Chinese military will have to make heavy arrangements for weapons and vehicles to offload its soldiers into the Taiwanese territory, which is only possible through the water. It is not possible to airlift such entities in that amount owing to the limited availability of space.
The task of Chinese forces will not be that easy. To enter the Taiwanese territory, they will have to face sea mines, fast attack craft, and missile assault boats, besides a well-trained land-based navy professional.
Strategy 4: Guerrilla War, Every 1 out of 6 Taiwanese is up for it:
Even though China finds its way into the Taiwanese territory by crossing the multi-layered sea defence lineup then the dragon will have to be ready for the Guerrilla war in the main territory.
Taiwanese Man-portable air-defence system (MANPADS) and Mobile Anti-armour weapons like Mobility Artillery Rocket System (HIMRAS) will be brought under use by the Taiwanese military in the war on land against the Chinese forces. The buildings will be brought into use as barracks.
The report coming in from the RAND foundation in 2017 shows that the Taiwanese Reserve Military system is equipped with 25 Lakh personnel and 10 Lakh civil defence volunteers, which is 15% of Taiwan’s entire population.
Strategy 5: Defending its Defence system:
Among the main tactics of Taiwan during a possible war scenario will be to defend its defence system like aircraft and Anti-Ballistic defence system. Bringing these defence systems into use, Taiwan can destroy the Chinese Ballistic missiles by intercepting them. In the past few years, Taiwan has bought several advanced fighter jets from the US, besides building AIDC F-CK-1 indigenously.
Taiwan has positioned its aircraft in its most secure base. The pilots are being trained to land their jets on highways during the heavy bombing. The US on the other hand has ensured Taiwan of providing support to its defence system and assisting on the intelligence front. Taiwan is up and prepared for any possible invasion coming in from China.
The island nation has given sufficient signals to the Chinese government that they will have to incur a huge loss during any war that might take place in the coming days.