Tapsee Pannu launches her own Production House, calls it as Outsiders films 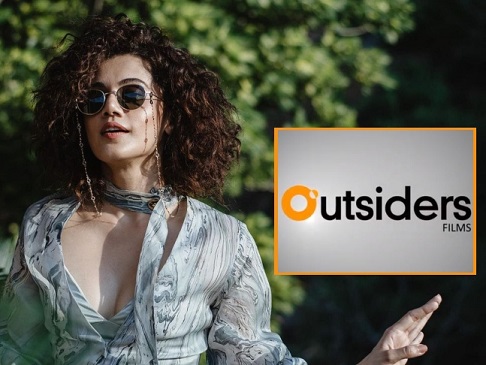 Modern-age actress comes up with her new project. She has been working in the films from more than a decade and is excited to touch a new milestone by launching her new Production House. Taapsee shares, “I am thrilled to embark upon this new journey and diversify my love for cinema with my production house ‘Outsiders Films’. Having my business ventures, management comes naturally to me. Hence, I always thought of setting my own production house. The audience and the industry have given me a lot of support and love over the 11 years of my career. With Outsiders Films, I aim to give back to the industry and empower talent who are looking for a breakthrough and come with no background like me. Pranjal and I together look forward to opening doors for new and fresh talents, both in front and behind the camera.”

Tapsee Pannu announced ‘Blurr’ as her first film as a producer. Blurr is jointly written by Pawan Sony and Ajay Bahl.

Talking about the film, Taapsee said, "Blurr is the just kind of script I was waiting for. I’m delighted to be finally turning a producer with this film and with the support of co-producers and team, I'm sure it's going to be an enriching journey. Collaborating with Ajay is as exciting as it gets as I've seen his work. He is the best to bring the gripping story of Blurr on-screen”.

Also read: Never Have I Ever Season 2 Review: Devi turns out to be wittier and intelligent

"Blurr is a thought-provoking and intriguing story which really excited me as a director. This association with Zee Studios and Taapsee will surely make Blurr a memorable film for me. With the massive scale it promises and the narrative it brings along I believe Blurr will not only be a power-packed entertainer, but it will stay with the audience too. The reason being, it is not only an arresting psychological thriller but it also has an intriguing social context," thoughts shared by Ajay Bahl regarding the new project.