Megastar Chiranjeevi's nephew and Telugu actor Sai Dharam Tej, who was injured in a bike accident in Hyderabad, is stable, said doctors at a private hospital, where he was undergoing treatment. 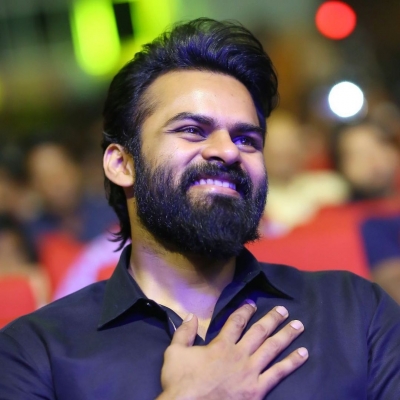 Megastar Chiranjeevi's nephew and Telugu actor Sai Dharam Tej, who was injured in a bike accident in Hyderabad, is stable, said doctors at a private hospital, where he was undergoing treatment.
Apollo Hospital, in a medical bulletin, stated that Sai Tej is stable and all major organs are functioning well.
"He will continue to be on assisted respiration in ICU for controlled close monitoring and additional investigations will be performed during the day," said the bulleting released Saturday morning.
Sai Tej, a nephew of megastar Chiranjeevi, was injured on Friday night after he fell down from a bike he was riding in Madhapur, the information technology hub.
Also Read: Sai Dharam Tej injured in a bike accident; Jr NTR, other celebrities wish speedy recovery
According to police, the sports bike he was riding skid and fell near Cable Bridge in the Madhapur area. He suffered multiple injuries and was rushed to nearby Medicover Hospital by 108 ambulance, reportedly in an unconscious condition.
The 34-year-old was subsequently shifted to Apollo Hospital. Doctors said there were no major injuries to the brain, spine and major organs, based on preliminary investigations. He sustained soft tissues injuries and a collar bone fracture.
The actor was heading towards IKEA from Cable Bridge when his bike skid and he fell on the road. Assistant Commissioner of Police (ACP) Raghunandan Rao said the bike skid and Sai Tej lost control apparently due to some sand on the road.
The police official said Sai Tej was wearing a helmet and was not under the influence of alcohol at the time of the mishap. He sustained injuries above his eye and chest.
A case was registered at Raidurgam police station under the Cyberabad police commissionerate. CCTV footage of the accident has also surfaced and went viral on social media.
Bike riding is the actor's hobby. He moves around on bike when he has no shooting schedule.

Also Read: Popular Malayalam Actor Ramesh Valiyasala found dead in his residence
As the news of the accident spread, wishes for his speedy recovery poured in from film personalities and actor's fans.
Mega star Chiranjeevi, and other family members including producer Allu Aravind, actor-politician Pawan Kalyan, actor Vaisshnav Tej, Niharika, actor Sandeep Kishan reached Apollo Hospital and enquired about the Sai Tej's health.
Sai Tej is son of Chiranjeevi's sister Vijaya Durga. He made his acting debut in 2014 and has so far acted in more than a dozen movies.