On Friday evening, Sai Dharam Tej was injured in a bike accident. Sai Dharam Tej's uncle and film producer, Allu Arvind, assured him that he is no longer in danger. 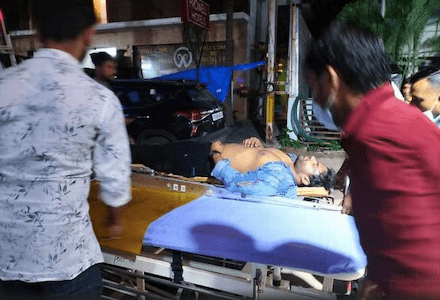 On Friday evening in Hyderabad, actor Sai Dharam Tej was involved in a bike accident. The actor was initially treated at Medicare Hospital before being transferred to Jubilee Hills Apollo Hospital for further treatment. He is no longer in danger. According to a medical statement, Dharam Tej has no serious damage to his brain, spine, or essential organs. He did, however, incur soft tissue damage as well as a collarbone fracture.
According to police, 'the sports bike he was riding skid and fell near Cable Bridge in Madhapur area. He suffered multiple injuries and was rushed to nearby Medicover Hospital by 108 ambulance, reportedly in an unconscious condition.
He was subsequently shifted to Apollo Hospital, where his condition is stated to be stable.'
A police officer of Madhapur police station said the actor apparently lost control over the vehicle and fell down.
Also Read: Tollywood actor Sai Dharam Tej injured in road accident

Sai Tej, nephew of megastar Chiranjeevi, is said to be passionate biker. He moves around on bike when he has no shooting schedule. 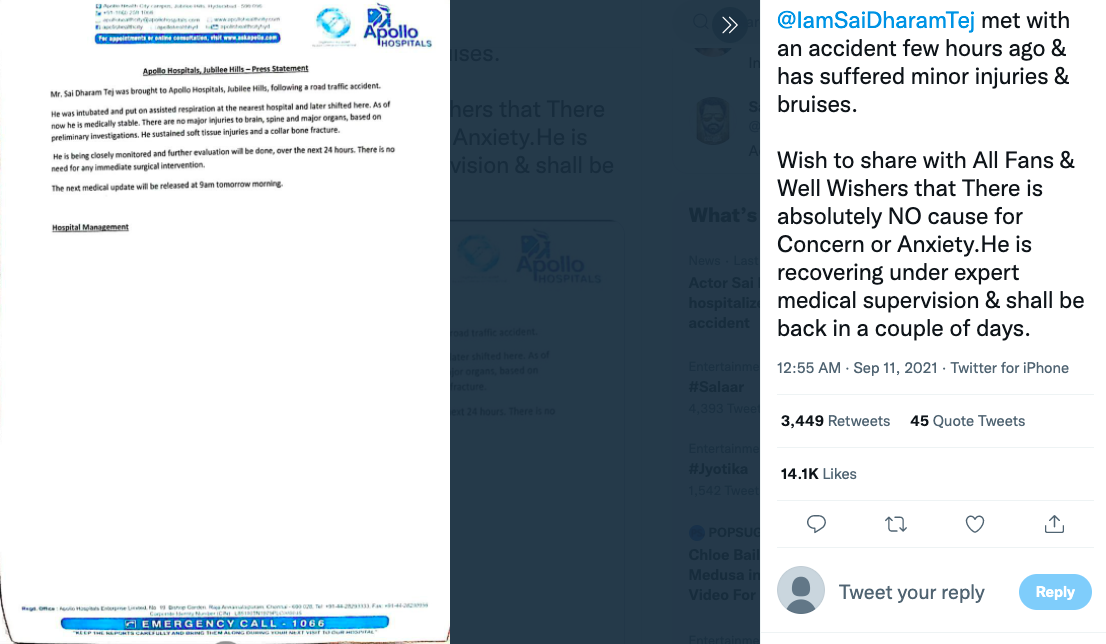 “@IamSaiDharamTej met with an accident few hours ago & has suffered minor injuries & bruises. Wish to share with All Fans & Well Wishers that There is absolutely NO cause for Concern or Anxiety. He is recovering under expert medical supervision & shall be back in a couple of days,” the tweet read.
As the news of the accident spread, wishes for his speedy recovery poured in from film personalities and actor's fans.
Also Read: Govinda’s wife Sunita slams Comedian Krushna Abhishek: ‘Don't want to see his face’
Meanwhile, Chiranjeevi, his brother, actor-turned-politician Pawan Kalyan, producer Allu Aravind, the actor's younger brother Vaishnav Tej, and other members of his family arrived at the hospital.
Pawan Kalyan's video from the hospital, in which he can be heard saying that Sai Dharam Tej is now unconscious and under observation, was uploaded by a fan. See video here.
Sreenivasa Kumar, the producer, also shared a video of an inspector explaining how the tragedy occurred.  “Sai Dharam Tej’s bike skid due to mud on the road. He is out of danger and is currently receiving treatment,” police said.

Many of Sai Dharam Tej's friends tweeted to wish him a fast recovery as soon as the news of his accident became public.Wild Dog actor Ali Reza tweeted, “Just got to know some unfortunate news about Sai Dharam Tej. Let’s pray for his speedy recocvery. Insha Allah.”
Manoj Manchu is “glad” that Sai Dharam Tej is out of danger. “Mithrama #SaiDharamTej We all are glad u r out of danger. recover fast mithrama … love you,” the tweet read. Jr NTR tweeted, “Wishing you a speedy recovery brother.”
On the work front, he'll next be seen in Republic, a political thriller. Deva Katta is directing the film, which is being produced by JB Entertainments. Aishwarya Rajesh, Jagapathi Babu, and Ramya Krishna also feature in the film. This year's release date is set for October.