The Kapil Sharma Show will return to the small screen on 21st August this year. 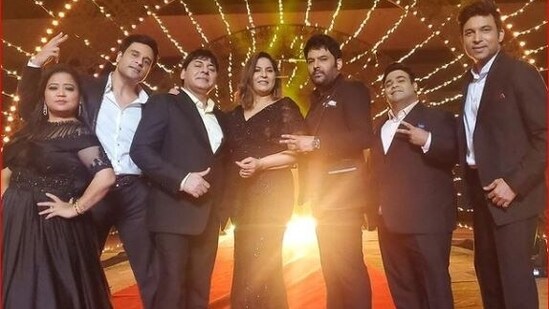 The Kapil Sharma Show will finally return on Sony Television soon. Fans have been waiting earnestly for the famous comedy show to resume so that they can spend their weekend evenings laughing and in a jolly mood.

According to reports, earlier the show was expected to resume on Sony from 25th July 2021. The leading actors including Kiku Sharda, Krushna Abhishek, Bharti Singh, and Kapil Sharma even met for a creative meeting a few weeks ago. However, the actors were reportedly demanding a hike in their fees and the negotiation was taking a long time to finalize which is why the show was getting delayed.

Earlier, Kapil had taken a break from work to spend time with his family. However, now it appears he is back to work on his longstanding show. Captioning the happy selfie with his co-actors, he wrote, "new beginning with all the old faces #tkss #thekapilsharmashow #blessings #gratitude #comingsoon".

His co-star Bharti Singh had also taken to her social media to share a tableau shot of the whole cast posing together, confirming their reunion. She wrote in the caption, "India aapka intezar huva khatam the "Dream Team" is back with a bang #TKSS #TheKapilSharmaShow @sonytvofficial." In her picture, Archana Puran Singh is also seen posing with the 'The Kapil Sharma Show' gang.

This year’s season of the show is expected to be very different from what the viewers have enjoyed until now. The famous standup comedian and the host of the show had earlier mentioned that they are welcoming new talent both in the acting and writing category to offer variety to the audience and break the monotony.

Other regular characters like Titli Bhabhi, Sapna, Baccha Yadav, Bhuri, and Chandu chaiwala will continue to feature on The Kapil Sharma Show. But now they will share the stage with new talent from the world of comedy which is expected to give a fresher approach to the show.

He had tweeted in March that he is looking for fresh talent for his show. “I am excited and happy to welcome new talent – actors and writers on The Kapil Sharma Show. Looking forward to meeting like-minded and talented individuals who have the right passion towards entertainment,” Kapil had written. The actor-comedian is also a part of Netflix show whose details are being kept under wraps.