RRR star cast reaches on the set of Kapil Sharma Show, The cast will join Kapil on the New Year Special episode 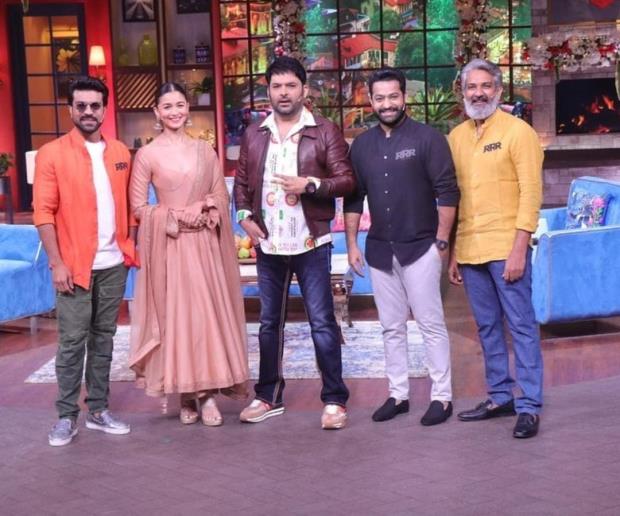 RRR is all set to release on the big screen on 7 January 2022. As the release date is coming, the cast is busy with their promotion schedules. SS Rajamouli directorial RRR stars Jr NTR, Ram Charan, Alia Bhatt, and Ajay Devgn.
The star cast for their next promotional event will be seen in the upcoming episode of The Kapil Sharma Show. The Kapil Sharma Show is going to end the year with a grand celebration. To take part in the celebrations, the star cast of RRR along with their director will join Kapil. In the New Year special episode, Alia Bhatt, Ram Charan, Jr NTR, and SS Rajamouli will be seen having fun with Kapil and his team.

The makers shared some teasers of the episode. In one of the clips, Krushna Abhishek dressed as Sapna enters the scene and taking a jibe at Alia, questions her about the plans regarding the sequel of 'Kapoor and Bahus'. On this, Jr NTR and Ram Charan laughed whereas Alia blushed.
The episode will have many funny moments. It will give you a full laughter pack for your New Year. In one of the parts Kapil questioned Alia, 'Did you hear the story before signing RRR or did you say yes just after hearing the letter 'R'?'
After hearing this joke Ram Charan, Jr NTR, SS Rajamouli were left in Splits.  The letter 'R' is in the air from the time when in an event of Brahmastra Ranbir asked Alia what letter 'R' means to her?
Also read: Happy Birthday Ratan Tata: Read here to know his ‘Mantra’ of Success
Kapil also asked Rajamouli about the Title of the film. He asked him why he titled the movie 'RRR'. Is it stands for Rupya, Rupya, Rupya?
RRR will be released in theatres on 7 January 2022. It is a multilingual movie. Ajay Devgn and Alia Bhatt will be making their Telugu debut in this movie. The film is made on a huge budget of 400 crores. As a multi stars film fans are waiting to witness the film on the screen.