The incident happened in the program of Anil Joshi, who joined SAD after being expelled from BJP, due to being at a great distance, the shoe did not reach Sukhbir, and the police caught the accused 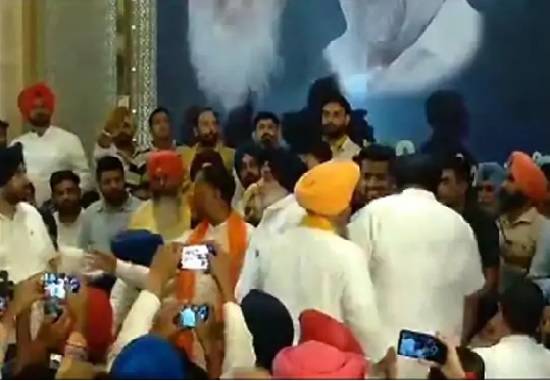 After this incident, there was an atmosphere of chaos for some time. However, the person throwing the shoe was far away from the stage and the thrown shoe could not reach Sukhbir Badal. The policemen present on the spot caught the man and took him out.

This was Anil Joshi's first program in Amritsar after being expelled from the BJP and joining the Shiromani Akali Dal and it was being considered as his show of strength. Joshi kept this program in the Amritsar North assembly constituency, from where he has been MLA for two times on a BJP ticket.

In the 2017 assembly elections, Anil Joshi lost to Sunil Dutti of Congress. Some time ago, Anil Joshi had advocated talks with the farmers agitating against the new agricultural laws, after which the BJP expelled him from the party. After that, Anil Joshi had moved to Shiromani Akali Dal last week.

Earlier, not only the BJP, but the Congress and the Aam Aadmi Party were also keeping an eye on the program organized by Joshi. The BJP kept trying to know which workers went to the program in support of Joshi. Presently Congress's Sunil Dutti is the MLA from this seat and Congress leaders kept trying to know how much support Joshi, who was a two-time MLA from this seat this time, is getting.

The honor was received in Darbar Sahib , after being expelled from the BJP, Anil Joshi, who joined Shiromani Akali Dal, was made the party's Vice President on the very first day. After that on reaching Amritsar, Joshi was welcomed by more than 500 workers of Akali Dal and Bahujan Samaj Party. Many workers of the North area have also spoken of supporting him in the elections together.