This fruit can charge your phone's battery suggests study

Imagine if we could use plants and fruits, to store electricity that charges commonly used electronics like mobile phones or even electric cars? Researchers have done just that and developed a method that uses durian and jackfruit waste to create energy stores for rapid electricity charging. 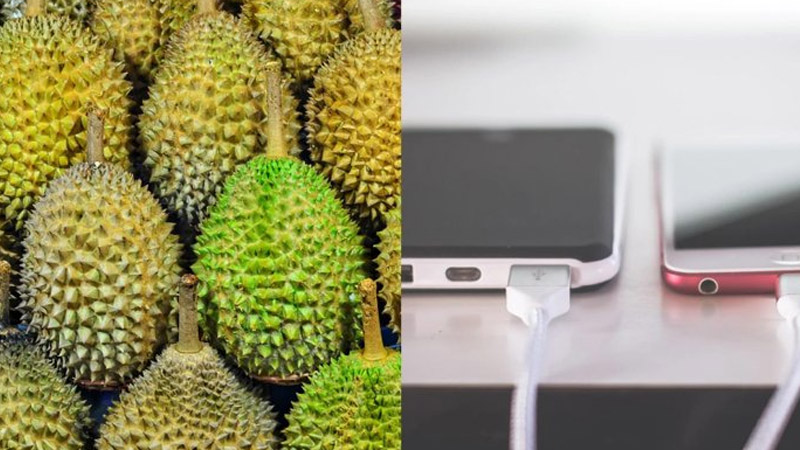 In the study, published in the Journal of Energy Storage, the research team explaind how they managed to turn the tropical fruits into super-capacitors.

Super-capacitors are like energy reservoirs that dole out energy smoothly. They can quickly store large amounts of energy within a small battery-sized device and then supply energy to charge electronic devices, such as mobile phones, tablets and laptops, within a few seconds.

"Using durian and jackfruit purchased from a market, we converted the fruits' waste portions (biomass) into super-capacitors that can be used to store electricity efficiently," said study researcherr Vincent Gomes, Associate Professor at University of Sydney in Australia.

"Using a non-toxic and non-hazardous green engineering method that used heating in water and freeze drying of the fruit's biomass, the durian and jackfruit were transformed into stable carbon aerogels -- an extremely light and porous synthetic material used for a range of applications," Gomes added.

"Carbon aerogels make great super-capacitors because they are highly porous. We then used the fruit-derived aerogels to make electrodes which we tested for their energy storage properties, which we found to be exceptional," Gomes explained.

According to the researchers, compared to batteries, super-capacitors are not only able to charge devices very quickly but also in orders of magnitude greater charging cycles than conventional devices.

Current super-capacitors are made from activated carbon which are nowhere near as efficient as the ones prepared during this project, they said.

Explaining why they picked durian and jack fruit, Gomes said: "Durian waste was selected based on the excellent template nature provides for making porous aerogels."

The durian and jackfruit super-capacitors perform much better than the materials currently in use and are comparable, if not better, than the expensive and exotic graphene-based materials, according to the study.

"Durian waste, as a zero-cost substance that the community wants to get rid of urgently due to its repulsive, nauseous smell, is a sustainable source that can transform the waste into a product to substantially reduce the cost of energy storage through our chemical-free, green synthesis protocol," Gomes said.