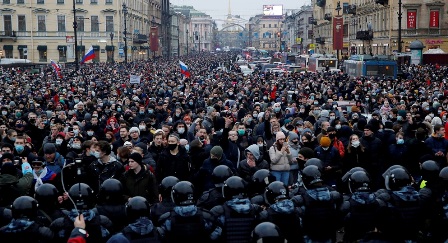 Thousands of people around Russia took to the streets to protest against Putin. Even after police announced a ban of protest and warned people to stay home, many were seen standing up in solidarity with Alexei Navalny.

After one of the largest protests, police arrested more than 1000 people. The protest occurred after reports alleged that opposition leader Alexei requires medical treatment which is denied to him. The Kremlin critic was jailed in February and is on hunger strikes for weeks. He is demanding medical attention for acute back pain and leg numbness.

Moscow city witnessed the largest protest of the day. Other cities like St Petersburg, Vladivostok in the Far East, cities in Siberia and the central city of Vladimir also observed protests on April 21. The top aide and spokeswoman of Alexei Navalny were also detained after Russian police raided the Saint Petersburg offices.

On Wednesday, April 21 UN rights experts warned that Navalny’s life was in serious danger. They alleged that the conditions in which Navalny is held could amount to torture and called on Russian authorities to release Navalny for urgent medical care.

The statement from UN experts stated, “Navalny has been kept in harsh conditions in a high-security penal colony and denied access to adequate medical care. The conditions may amount to torture. We urge the Russian authorities to ensure Mr. Navalny has access to his own doctors and to allow him to be evacuated for urgent medical treatment abroad as they did in August 2020.”

Alexei’s ally has urged that his situation is critical and his health has sharply deteriorated. Around 16000 protesters protested on Wednesday in Russian streets. Navalny’s supporters were unsatisfied and said that they don’t think this protest can save him. Around 200,000 to 300,000 people are needed to come out to the streets for Alexei.

One of the demonstrators said, “This is one of the last gasps of a free Russia.” “This is a fight for the future,” another added.

Get the latest update about Navalny kept in harsh conditions, check out more about UN rights experts, Politics News, World News & People stand out with Navalny