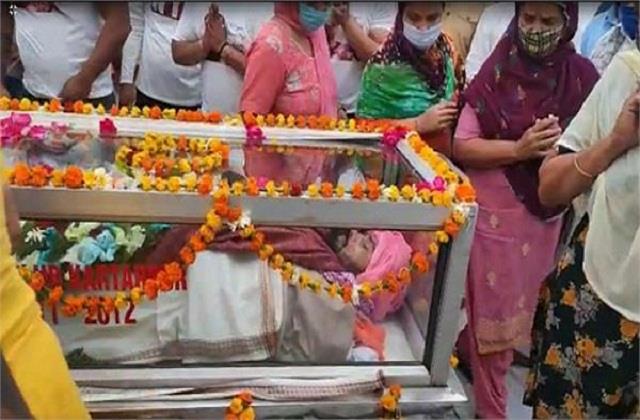 The cremation of Punjabi Singer Diljaan, who died in a horrific road accident on March 30, was held today in Kartarpur. The unfortunate car accident occurred while Diljaan was driving from Kartarpur to Amritsar to record a song.

As per information, his cremation was delayed as the family members of Diljaan couldn’t reach India on time. Diljaan’s brother also returned to the country just two days back. The body of the Punjabi singer was kept in a morgue and was cremated today.

A huge crowd was gathered outside Diljaan’s residence in Kartarour. Thousands of people had arrived to attend the singer's cremation. The singer was cremated in the presence of family and friends owing to covid restrictions.

According to police, the accident occurred around 3 am on March 30. Reportedly the singer was driving to Amritsar in his Mahindra KUV 100 vehicle. The fast-driven vehicle collided with a truck parked beside the road in Jandiala, resulting in serious injuries to the singer. Following the accident, Diljaan was rushed to the nearby private hospital.

Given health complications and serious injuries, he was referred to a hospital in Amritsar, where doctors declared him brought dead.

Meanwhile, some of his tracks that gained enormous support were; Shoon Karke, Black Pranda, Mera Dil, Rattan, Yarran Di Gal, and Guru Sikh. In fact, his latest project ‘Tere Wargey 2’ was planned to be released on April 2. All excited about the new one he was busy in promotions but little did he know what destiny had planned for him.

Also, paying respects to the late actor Punjab CM Capt. Amrinder Singh wrote a heartfelt message, “ shocked at the tragic death of young and promising Punjabi singer Diljaan in a road accident earlier today. It is extremely sad to lose young lives like these on road. My condolences to the family, friends and fans. RIP!”