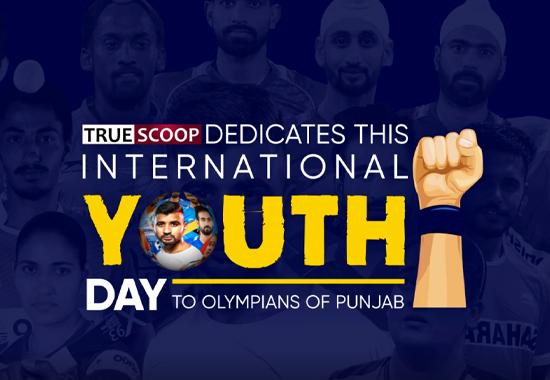 Tokyo 2020 Olympics ended with a great bang with Indian athletes bringing seven medals home. This was the best performance of the country in Olympic games as our heroes broke several records in the major tournament. Where Gold medalist Neeraj Chopra won India’s first-ever Olympic medal in athletics, our Men’s hockey team ended 41 years of medal drought by winning bronze.

Mithapur (in Jalandhar, Punjab) hockey players were welcomed with huge celebrations in their hometown after which the Olympians- captain Manpreet Singh, Varun Kumar and Mandeep Singh danced their hearts out on Punjabi songs to celebrate their win at Tokyo 2020 Olympics.

In an interview with True Scoop, our Olympic heroes talked about their struggles and motivation behind their incredible achievements.

“We were more than happy after winning the Olympic medal for country. It was an emotional moment for the team and everyone was hugging each other and celebrating,” told hockey player Varun Kumar.

“The team dedicates this win to doctors and all front line workers as they offered their services despite high risk and are working their heads off since the covid struck,” said Captain Manpreet Singh

Manpreet Singh- I belong to a middle-class family. Despite financial problems, my family supported me.

Being a part of the national team is itself a big achievement and making it to the squad is not easy. I worked hard and tried to boost my confidence level.

Varun Kumar- My family's financial situation was dire. They, however, fulfilled all of my desires they could and stood by me.

My hockey career got off to a poor start. I wasn't always as good as you see me now, but I worked hard and continued pushing myself to be the best I could be.

I wasn’t selected for the Tokyo 2020 Olympics which was really disappointing for me. I was on standby, but the rules changed and standby players were permitted to play in the game, which made me extremely happy.

Manpreet- Earlier the sport did not get much support. However, the situation is changing and the government is stepping forward to do more. In fact, the state government has increased hockey players' cash awards to Rs 2.51 crore by Rs. 1 crore.

Nothing is achieved over time and everything takes time. The situation of sport has improved and after the Olympic medal, the condition will only get better.

Varun- Presently, the government is providing full support to players and organisations too. In fact, compared to other sports, hockey coaches are paid the most.

Even when Covid was at its peak, the government continued to motivate the team, providing better equipment. People who were working to provide the best for team are also instrumental in the Indian win at Olympics.

Also Read: Punjab Makes India Proud At Olympics 2020 With Most Players; Know Who They Are

When asked about hockey’s future in India, our Olympians said that government support has increased. "Besides we are hopeful that the medal win inspires youngsters to pursue the sport."

The future of Hockey is brighter than ever.

Jalandhar's Hardik Singh who plays as a Midfielder tells that he comes from a complete hockey background. My father played for India, grandfather was a hockey coach. My mentor is my parental uncle who is a former drag-flicker of India.

Hardik proved himself by scoring some crucial goals in the match against Great Britain and also scored the second goal in the last match against Germany.

Women’s hockey team player Grujit Kaur belongs to Amritsar, Punjab. “When I was in boarding school, which was one of the best schools for women’s hockey, I realized my passion for the game. “I came under scrutiny in the 2017 Asian Cup and qualified for the Hockey World Cup.”

In 2018, she scored a series of 8 goals and became the highest goal scorer; she also converted 7 penalty corners in the Hockey World Cup quarter-finals. She represented the Indian national women’s hockey team as a defender as well as a drag-flicker; She scored India’s initial goals. Gurjit’s two consecutive goals made India jump back in the bronze game.