Tulsi Vivah 2021: Know date, time, significance, and all about the day

The day is observed to celebrate the marriage of the Hindu sacred plant Tulsi and Lord Vishnu. 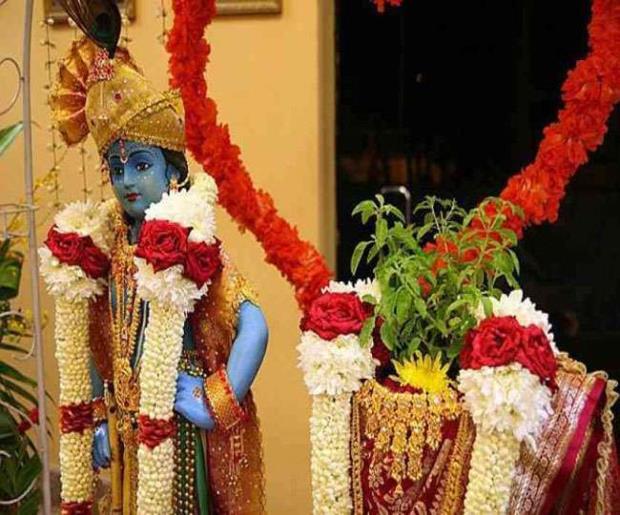 Tulsi is one of the sacred plants in Hinduism, many Indian households have Tulsi plants in their courtyard to worship it on the daily basis. Tulsi Vivah is celebrated by the Hindus to celebrate the ceremonial marriage of Tulsi and Lord Vishnu.

The Ekadashi Tithi of the Kartik, Shukla Paksha (eleventh day during the waxing phase of the Moon in Kartik month), is associated with Tulsi Vivah. This year Tulsi Vivah would be celebrated on November 15. However, those who would observe Prabhodini Ekadashi Vrat (Devutthana Ekadashi Vrat) can celebrate the vivah on November 14.

On the day of Tulsi Vivah, the plant of Tusli (a form of goddess Laxmi) and Shaligram stone (a form of Lord Vishnu) are dressed as bride and groom and all wedding rituals are performed.

After the Ekadashi and Vivah, the seasons of ceremonies and celebrations begin. It is also believed that on this day Lord Vishnu wakes up from his yogic sleep after four months.

In some parts of the country, Tulsi vivah is performed with Lord Krishna.

According to the Shivpurana tale, Mahadeva's rage was directed at a prominent demon known as Daityaraj Jalandhar. Jalandhar had a wife named Brinda.    Jalandhar was endowed in such a way that he could not die till his wife's chastity was ruined. Jalandhar had caused a commotion all over the place. He had conquered heaven with his might, but his arrogance had destroyed him. He eventually made it to Mount Kailash. He attempted to assassinate Mahadev there. Because he was a part of Mahadev, he had Mahadev's might as well as the power of Brinda's chastity so, even Mahadev couldn't kill him.

The gods then pleaded Narayan and then, disguised as Jalandhar, Narayan approached Brinda. Brinda treated him like her spouse and began acting like one. This shattered her chastity, and Brinda's husband Jalandhar was defeated and died in the war.

When Brinda learned of Narayan's Leela, she became enraged and cursed Narayan for being stoned. There was an imbalance in the earth after God became a stone. All of the deities approached Brinda and asked her to break the curse on Narayan. Brinda then delivered him from the curse and self-immolated.

The tulsi plant grew where Brinda was demolished. Then Narayan said, "To fulfil your curse, one of my forms, Shaligram, will stay on Earth as a stone. In this manner, you will always be with me." Tulsi was thereafter worshipped as a sacred plant, and on the day of Devotthan Ekadashi, a practice of tulsi marrying Shaligram began.