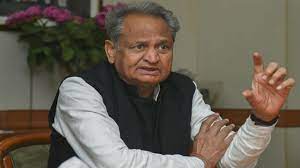 Where Rajasthan is battling with a high number of coronavirus cases, the state is also witnessing disbalance in the Gehlot government. An example of this disbalance could be seen on Wednesday when two ministers clashed during the cabinet meeting. When the clash occurred Chief Miniter of the state Ashok Gehlot was also present.

The clash erupted between Rajasthan education minister and PCC chief Govind Singh Dotasara and Urban development minister Shanti Dhariwal. Both the ministers are close to CM Gehlot. However, this is not the first time both were standing opposed to each other.

The fellow minister tried to intervene after witnessing a growing debate between the two. But the clash raised to the extent that both started to threaten to see each other once they come out of the meeting and CM Gehlot had to turn off the camera in between.

The cabinet meeting was held to decide the status of the board exams of Class 10th and 12th. In the meeting, Dotasara discussed the vaccination and said that Congress launched a social media campaign demanding free vaccination. To this cause, a memorandum should be submitted to the collector at the district level.

Interrupting Dotasara, Dhariwal said that there is no need for this, ministers are not supposed to submit a memorandum. Following this Dotasara objected to his interference in the matter and the clash began. Soon both were indulged in a war of words and other ministers had to intervene to calm them down.

But the dispute once again started as Dhariwal told Dotasara that he has seen many party presidents and he can do whatever he wants. Dasara said, “Being party in charge of Jaipur, you have not even taken a meeting till date in the last two and a half years. This attitude of yours is not good for the party, I will report it to Sonia Gandhi.”