A tragic accident took place near Anaj Mandi in Sector 26 of Chandigarh on Monday. The collision took place between two trucks loaded with RBI money. The accident was so horrific that everyone was heartbroken 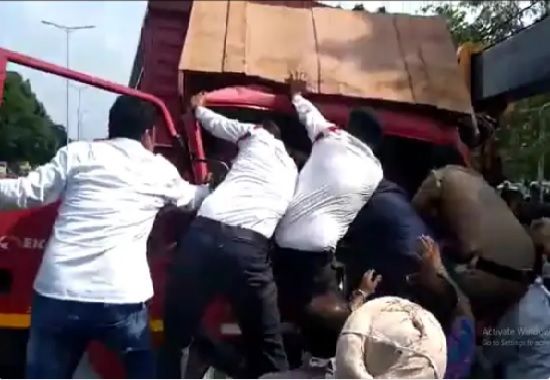 On Monday afternoon, two trucks collided badly on Sector-26 Madhya Road in Chandigarh. Both the trucks belonged to the Reserve Bank of India (RBI). Both the trucks were going back and forth to deposit the cash. During this, the truck driver in the front suddenly applied the brakes and the truck behind collided with him.

She has been identified as Popita posted in Chandigarh Police Lines. She is not in a condition to make a statement yet. On the complaint of Ram Singh, the driver of the third truck, the police have registered a case against Gurbhed and Tejinder, the drivers of the crashed trucks.

Both the trucks were going to deposit cash in RBI. In Sector-26, suddenly the truck driver in front applied the brakes and the truck behind rammed into him at high speed. In the accident, the front part of the previous truck was badly damaged and in view of the safety, the lady constable sitting next to the driver got stuck between the irons.

The people present at the spot immediately informed the fire department and police about the accident. After this, the woman constable trapped in the truck was pulled out by breaking the iron with the help of a crane. During this, traffic was also disrupted for a long time and there was a long queue of vehicles on the middle road. The police diverted the traffic route for some time and after the rescue, the traffic was smooth again.

It is being told that 5 trucks from RBI took cash from the railway station on Monday for the main branch of RBI located in Sector-17. All the trucks were full of cash. On Sector-26 Central Road, the truck driving at the front applied the brakes, then it collided with the one driving behind and the woman constable in it got stuck in the middle.

SP City Ketan Bansal, who reached the spot, said that as soon as information was received about this, the police team reached the spot and started the rescue operation. After which the woman was somehow pulled out. The matter is under investigation.